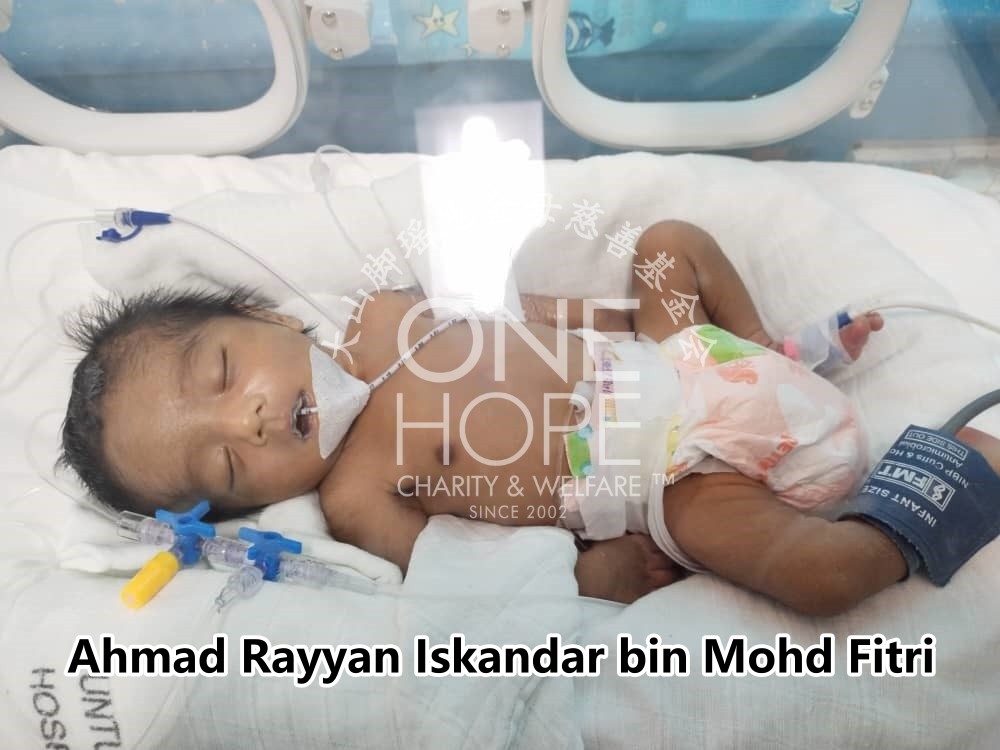 *This case will channel RM10,000 from the "Emergency Medical Reserve Fund". Hence, One Hope Charity will only launch fundraising of RM90,000 for this case.*

"The baby boy must have surgery within two weeks or his heart will gradually fail..."

The newborn baby boy Ahmad Rayyan Iskandar bin Mohd Fitri was born with cyanosis all over his body. The test confirmed that he was suffering from complex congenital heart disease. On the second day of his birth, he underwent surgery to expand the cardiovascular system. Although he was able to breathe without assistance after the operation, he still required heart repair surgery before his heart failed.

The mother was suffering from the painful wound left by the caesarean section and had to travel to and from the hospital and her residence on a daily basis. She had never held the child and was only able to touch him through the glass. The doctor informed the child that the operation would be required in two weeks, and the parents requested assistance with the operation fee.

【Parents have not had time to experience the joy of being a parent, but face the worry that their child's life is in danger】

A 24-year-old mother from Bandar Baharu, Kedah married and followed her husband to live in Puchong, Kuala Lumpur, and was planning to return to Kedah for delivery and confinement.

On December 29 last year, at the 36th week of pregnancy, the mother went to the clinic to seek medical treatment because the amniotic fluid broke. The doctor in the clinic urgently referred it to Kulim Hospital. The doctor found that the child's heartbeat suddenly dropped and the child was delivered by caesarean section. The baby was born 3 weeks earlier than expected.

The baby boy was born cyanotic and was placed in an oxygen-infused incubator. The following day, he was referred to Penang Hospital for an examination, which confirmed that the heart and blood vessels had been reversed. The baby boy was finally able to breathe independently without oxygen support after the hospital immediately operated to expand his heart.

The doctor informed the parents that their baby boy was in critical condition, with transposition of the great arteries (TGA), atrial septal defect (ASD), and patent ductus arteriosus (PDA), and that surgery was required within two weeks, or the small heart would gradually fail.

The young parents were terrified because they couldn't afford the surgery expenses.

Father Mohd Fitri bin Abu Hassan (24 years old) from Johor works as a courier and earns around RM3,000 per month, but he is currently on contract and has not been transferred to a full-time job. Before she married, Siti Nur Zahirah bt Zakaria (24), worked as a nurse in a nursing home in Seremban. She resigned after finding out she was pregnant in February of last year.

This is the couple's first child. The father has no income and must frequently travel between Selangor and Penang, so he cannot afford the surgery fee.

After reviewing the case, One Hope Charity decided to assist in raising for the boy's medical expenses. His family agreed to fully authorise One Hope Charity to take charge of the fundraising and collect donations from the well-wishers on their behalf.