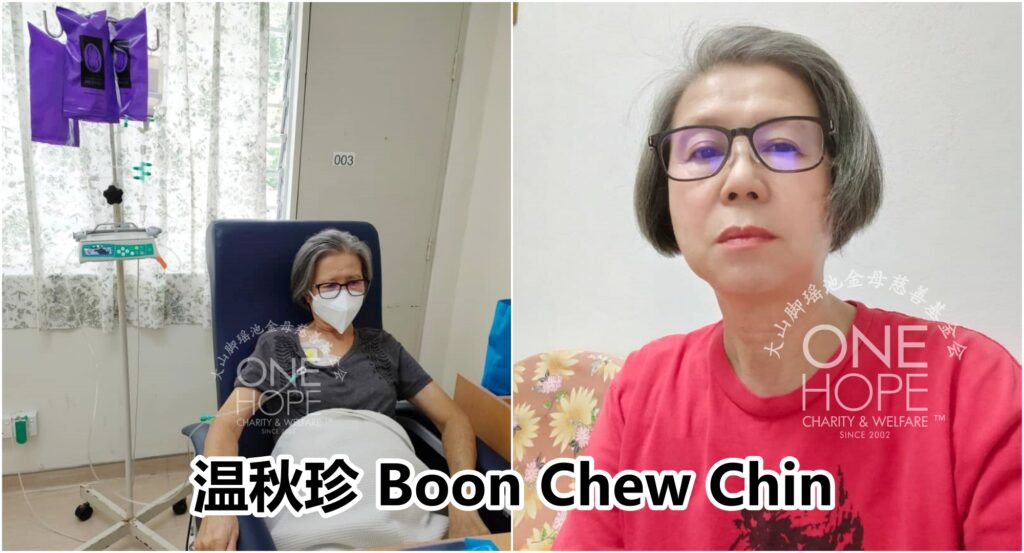 66-year-old unmarried woman Boon Chew Chin went to seek medical attention in early May because her stomach was bloated, her skin was yellow, her urine was brown, as well as shortness of breath. An examination revealed that she suffers from an early stage of pancreatic cancer. She is fortunate as the cancer was detected early, and the doctor recommended her to undergo six courses of chemotherapy treatment to shrink the tumor before undergoing a tumor removal surgery.

Chew Chin was a clerk and she is relying on her Employees Provident Fund (EPF) savings to support the cost of living after her retirement. And now, she needs to undergo six courses of chemotherapy, each costing RM6,000. She has already paid for a course and the remaining five courses cost a total of RM30,000. She hopes that she can continue to work and contribute to the society after her recovery, so she pleads for the help of the public.

【When she went to the hospital for treatment, it was found that the pancreas was abnormal, so she was referred to other hospitals for detailed examination. However, the dates of examination could not be fixed due to the lack of medical equipment. She later paid nearly RM10,000 to undergo a test at a specialist hospital and she was fortunate that the cancer was detected early so that she can undergo early treatment】

Chew Chin rode her motorcycle to the hospital alone in early May to seek medical treatment. The doctor urgently admitted her to the hospital and conducted blood test and ultrasound on her. The preliminary test found that there was a tumor in her pancreas, and she needed to be referred to two other hospitals for an endoscopic retrograde cholangiopancreatography (ERCP) and a computerised tomography scan (CT scan). However, the dates to run the tests could not be fixed due to the lack of medical equipment, so her cousin sister helped to discharge her from the hospital and she was transferred to a private specialist hospital for the examination.

She spent nearly RM10,000 to undergo the scans at the private specialist hospital. The results confirmed that she suffers from early stage of pancreatic cancer. After that, the doctor referred her to a cancer hospital for six courses of chemotherapy. She had her first course of chemotherapy on 8 June at her own expense, and each course of treatment lasted three weeks and cost RM6,000. She still needs five courses of chemotherapy, but she is unable to afford the expenses, hence, she approached One Hope Charity for help.

After retiring in 2019, Chew Chin has been relying on her Employees Provident Fund (EPF) savings to support the cost of living. She is currently living alone at the house of her deceased brother, and her nephews and nieces will help to send her to and from the hospital sometimes. In her spare time, she loves sewing. She makes blankets and also plastic reusable bags. She will also give out the blankets and reusable bags as gifts to her relatives and friends.

Since she is suffering from an early stage of pancreatic cancer and the recovery rate is high, so she hopes that the public can help her. After reviewing the case, One Hope Charity decided to assist her in raising the shortfall of RM30,000 in medical expenses. She agreed to fully authorise One Hope Charity to take charge of the fundraising and collect the donations from the well-wishers on her behalf.