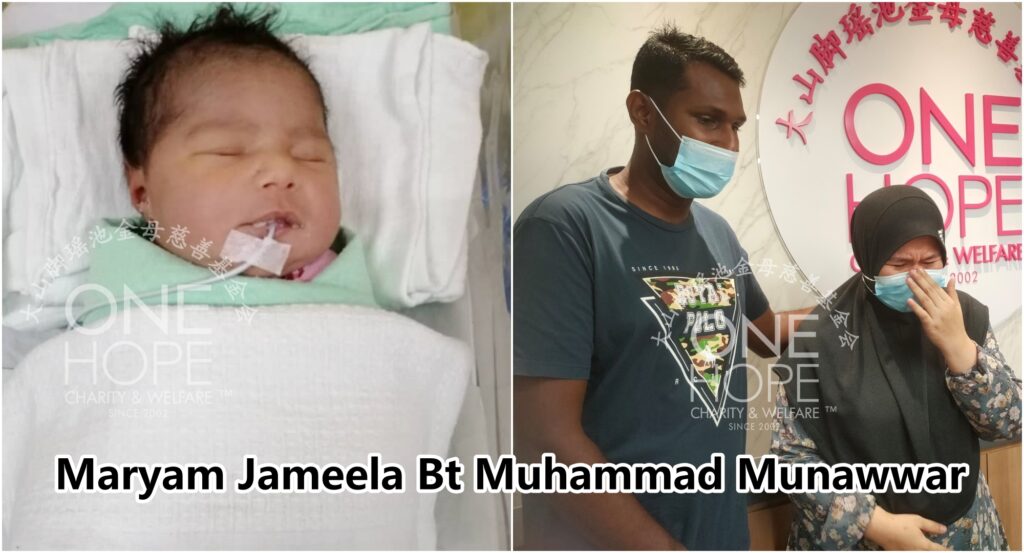 The main arteries in her heart are transposed. The new born baby was born with severe heart condition called the transposition of the great arteries, and her parents are urgently seeking help from the public to save their child.

Maryam Jameela Bt Muhammad Munawwar, who was born on 2 July, suffered from transposition of the great arteries, causing her to be unable to breathe on her own. She is being in a state of hypoxia and her life may be in danger at any time.

As soon as she was born, her mother only had time to kiss her once, and the newborn was found to suffer from cyanosis, and she was rushed immediately to the intensive care unit for treatment and observation.

When she was three days old, the doctor performed a palliative balloon atrial septostomy (BAS) on her so that she can have sufficient oxygen supply to her body. However, the BAS can only last for two months, and the long-term solution is for her to undergo a life-saving surgery, but her parents are worried about the surgery that cost RM100,000 as they can only afford RM5,000. They plead the public to help them with the remaining RM95,000 in surgical fee.

【A rare case that only happens one in every 10,000 babies born – the transposition of the great arteries】

Maryam Jameela is a baby girl from Penaga, a town in the North Seberang Prai of Penang. As her mother suffered from gestational diabetes, the doctor at Seberang Jaya Hospital worried that her condition would be dangerous to her baby, hence the doctor decided that the mother had to give birth to her baby two weeks before her expected due date. However, the delivery process was not smooth so the doctor performed an emergency caesarean section. The baby weighed 3.16kg at birth.

Her mother only managed to kiss her baby once, and the baby was rushed to the intensive care unit due to cyanosis. Examination results showed that the baby suffered from transposition of the great arteries (TGA).

The doctor performed a palliative balloon atrial septostomy (BAS) so that the baby can have sufficient oxygen supply to her body. However, the doctor informed that BAS could only last for two months. The baby girl is unable to breathe on her own and she is currently relying on a breathing aid to survive.

The baby was later referred to a specialist hospital in Penang, and the doctor informed that the baby needs to undergo a life-saving surgery before she is one month old. Otherwise, her life will be in danger at any time, but the parents are worried as they are unable to afford the RM100,000 in surgical fee.

The baby is in serious condition, and the mother cried almost every day as she is worried about her baby. She is also anxious and worried as they are unable to afford the huge medical expenses. Whenever someone mentions about her baby, she bursts into tears. She also ignores the pain caused by the caesarean section and travels between her house and hospital daily together with her husband to visit their baby and seek help to save the child.

Her 32-year-old father Muhammad Munawwar Bin Shavukath Ali originally operated a restaurant in Bangi in Selangor, but the restaurant closed down during the movement control order (MCO) period. He is currently assisting his friend in car towing and transportation, and does not have a stable job. He earns about RM1,000 a month. Her 33-year-old mother Siti Nurliyana Binti Mohd Sobri was a clerk before marriage and earned RM1,500 monthly. She quit her job after marriage and became pregnant. The couple is currently living in the house of the wife’s parent, and their life is stretched. They are unable to afford the huge medical expenses.

After reviewing the case, One Hope Charity decided to assist in raising the shortfall of RM95,000 in medical expenses. The family agreed to fully authorise One Hope Charity to take charge of the fundraising and collect the donations from the public on their behalf.