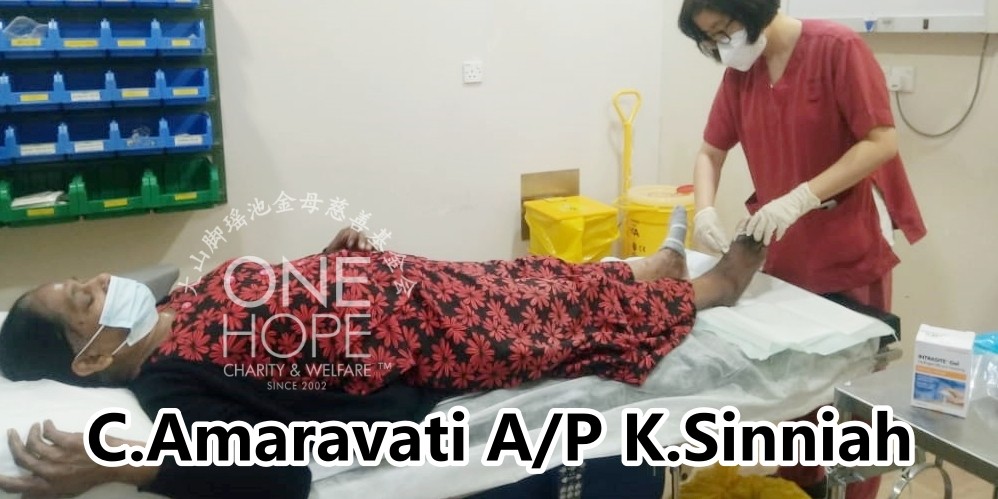 A woman, who is in her 60s, suddenly had swollen feet, fever, vomiting and dizziness, and even was bedridden and unable to walk. Her family member quickly sent her to the hospital and examination showed that both her legs were swollen, and the big toe of her right leg was infected. She needed to remove the pus on the toe, otherwise it may infect other areas of her body, which put her at a risk of amputation.

The doctor suggested an emergency surgery to remove the pus, and the surgery cost RM40,000. Her family can only afford RM15,000 and they are worried as they are unable to pay for the remaining RM25,000. The woman and her family are also worried about the risk of amputation, so they approached One Hope Charity, hoping to get some help.

【She thought that it was time for her to start enjoying her life, but unexpectedly she suffered from diabetes, and the wound on her foot also put her at a risk of amputation. The woman is sad about her health condition, and at the same time, she is worried that she may cause more financial burden to her child】

67-year-old woman C. Amaravati A/P K. Sinniah from Ampang in Selangor, suffered from diabetes six years ago. She has been relying on medication to control her condition. A year ago, she had a wound on the sole of her foot so she went to a private clinic to clean the wound every day. The woman’s right foot started to swell about two weeks ago, and she also experienced dizziness and fever.

Her son took her to a clinic for treatment, and the doctor informed that she needed to undergo examination at a hospital. The son thought that she only needed to undergo a test, so he took her to a specialist hospital. Unexpectedly, the examination report revealed that she suffered from right foot cellulitis and osteomyelitis, which is more commonly known as abscesses, which needed to remove through a surgery. Her blood sugar also soared so she was hospitalised for observation.

Her 71-year-old husband Ramasamy A/L Thurasamy is unable to retire due to the family’s financial condition. He works as a security guard at night, earning about RM800 a month. Their 43-year-old only son Ravikumar A/L Ramasamy is a wireman. His work is unstable, but he earns an average of RM1,600 a month. Their 42-year-old daughter-in-law is a housewife, and the couple have to bear the living and education expenses of their two children, aged 16 and 6.

The family could only afford RM15,000 by borrowing from their friends and family members, hence, they approached One Hope Charity for help.

After reviewing the case, One Hope Charity decided to assist in raisin the shortfall of RM25,000 in medical expenses. The family agreed to fully authorise One Hope Charity to take charge of the fundraising and collect the donations from the public on their behalf.