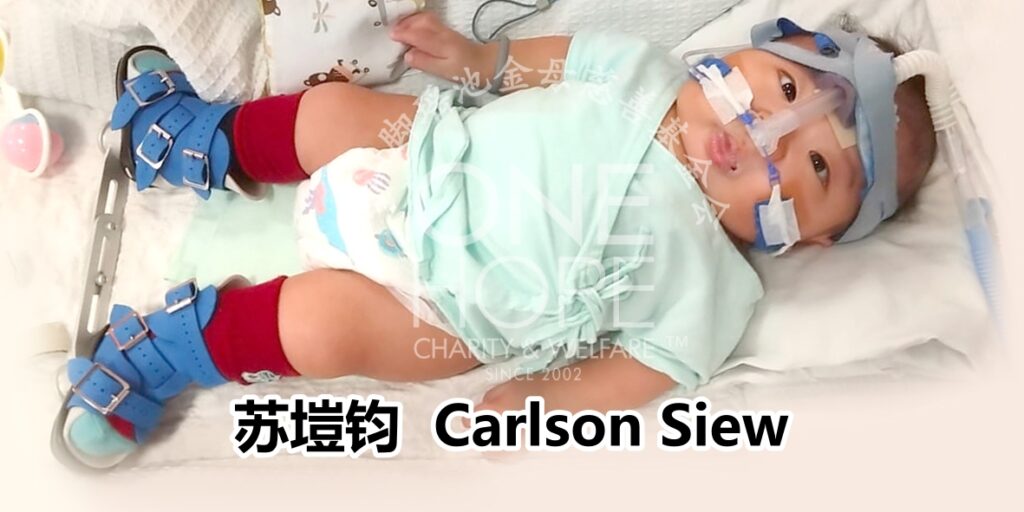 He was diagnosed with skeletal dysplasia, laryngomalacia and deafness in both ears as soon as he was born. Although the doctor has approved the baby’s discharge from the hospital, he needs medical equipment to continue survival. The expenses for his recovery are high, but the family has exhausted their savings on his treatment.

Carlson Siew Kai Jun is an eight-month-old baby boy from Kuala Lumpur. He was found to have underdeveloped bones in his hands and feet when his mother was in her last trimester of pregnancy. However, the doctor explained that it was still within the normal range, so the mother waited for the arrival of her child in an uneasy mood.

The mother gave birth naturally at full term, but baby Carlson did not cry when he was born. After some examinations, he was found to be severely hypoxic, and the doctor quickly sent him to the intensive care unit for a detailed check. The result ruled out congenital heart disease.

The doctor then performed various tests on the child and confirmed that he suffered from multiple congenital anomalies, skeletal dysplasia, laryngomalacia, tracheobronchomalacia, gastroesophageal reflux disease (GERD) and deafness in both ears. The news shocked his parents.

【He was hospitalised for eight months for various examinations, treatments and observations】

Due to respiratory obstruction, the baby boy had two tracheostomies (upper airway) when he was less than one month old and three months old. After that, his breathing became smooth, but he needed assistance from a continuous positive airway pressure (CPAP) machine.

The doctor informed the parents that the baby boy was underdeveloped likely due to a genetic problem, and suggested them undergo genetic testing. The baby boy has been relying on a CPAP machine since birth. The parents could not afford the equipment’s cost, and their family’s financial stability was greatly affected after the child’s eight-month admission. Hence, the parents approached One Hope Charity for help.

The baby’s 34-year-old father Siew Chee Sam is a car repair mechanic, earning about RM2,500 a month. His income was greatly affected as he needed to send his son to the hospital from time to time. His 27-year-old mother Lai Wye Yeing was previously a clerk, but she resigned and became a full-time mother to take care of her sick child. The couple has two other children, aged nine and six.

After reviewing the case following a home visit, One Hope Charity decided to assist the child with the expenses of his eight-month hospitalisation fees, his medical equipment and hearing aids.