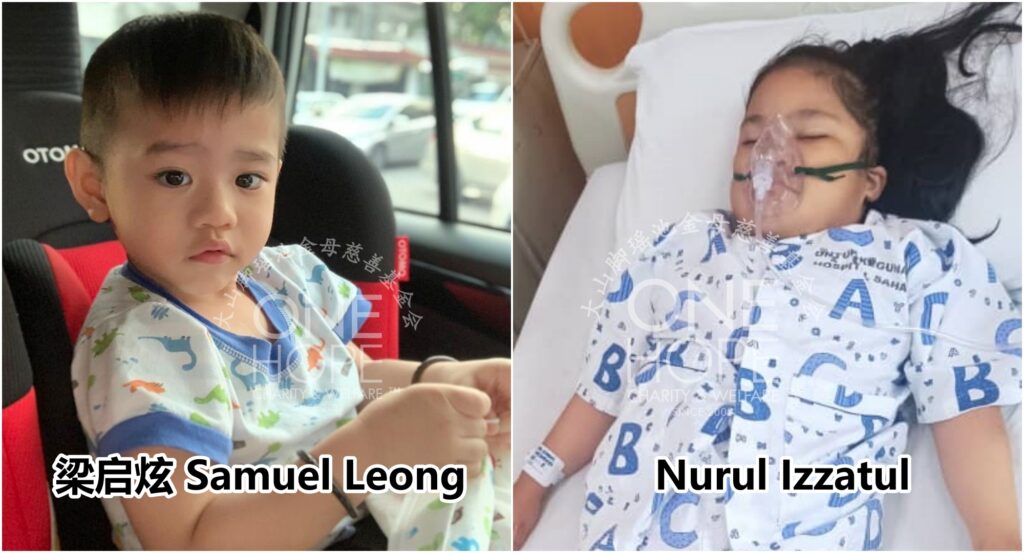 The two children were diagnosed with heart defects when they were small, and they went into the surgery room at a very young age for heart repair surgery respectively. Fortunately, the two survived and went through the years safely. However, as they grew older, the heart blood vessels could not supply them with sufficient oxygen anymore, so they needed another heart surgery to repair the defect.

Four-year-old boy Samuel Leong from Cheras, Kuala Lumpur, and seven-year-old girl Nurul Izzatul Binti Mohamad Izzat from Penang need a total of RM95,000 in the surgical fee. Both of them are not from a well-to-do family; their family members are unable to afford the huge surgical fee, so they plead to the public to save the children.

【Case 1: Four-year-old boy Samuel Leong had a heart defect since he was small, and now he urgently needs RM25,000 in medical expenses for a second surgery to prolong his life】

Four-year-old Samuel from Cheras, Kuala Lumpur, suffers from truncus arteriosus. He underwent heart repair surgery when he was eight months old. One Hope Charity provided his medical expenses at that time.

After that, little Samuel grew up and went to a kindergarten like the other children. He spent four years of his childhood safely. Last year, he ws tested positive for Covid-19 and developed a fever and cramps, so he was admitted to the hospital. Since then, his immunity has dropped sharply, and he is often sick.

He has recently started to lose weight similar to the weight loss he experienced as a baby, and he is often tired and has been less active, so his parents detected something was wrong.

When the parents brought him for the regular follow-up visit, the doctor informed them that Samuel’s blood vessels were gradually narrowed, resulting in his frequent hypoxia. In addition, as he grew older, the heart and his blood vessels were overloaded, and he also had weight loss, so he needed to undergo urgent Balloon Valvuloplasty and pulmonary valve surgery. However, the shortfall of RM25,000 in surgical fees worries the parents.

The boy’s 37-year-old father Leong Wai Khong is a property salesperson, earning RM3,300 a month. His 31-year-old mother Wong Ngan Yun resigned to care for her elderly mother and child. Samuel is their only son. The couple can cope with their living costs and cannot pay for the huge medical expenses. Hence, they approached One Hope Charity for help.

【Case 2: A chubby little girl looks adorable and lively, but a “time bomb” is hidden in her body. She urgently needs RM70,000 for a second heart surgery】

Seven-year-old girl Nurul Izzatul Binti Mohamad Izzat from Penang Island had her first heart surgery due to truncus arteriosus when she was three months old. One Hope Charity assisted with her surgical fee at that time, and the child was saved.

After the surgery, the girl had to go for regular follow-up visits every six months. Recently, she started to suffer from shortness of breath and fatigue. She wheegasspedzed even if she only walked a few steps. In her regular follow-up visit last month, the doctor discovered that her blood vessels were narrowed and her heart became swollen, so she urgently needed a second surgery.

The girl is in Year One now, but she can’t take part in intense sports activities at school. She also suffers from asthma, so she needs to rely on an inhaler to relieve her condition.

Her 32-year-old father Mohamad Izzat Bin Saudin works in a hypermarket, earning RM1,500 monthly. Her 31-year-old mother Iis Bt Osman is a nurse in a dialysis centre with a monthly salary of RM2,892. The couple has two other children, aged four and eight months old.

After reviewing the case, One Hope Charity decided to assist the two children. Their family members agreed to fully authorise One Hope Charity to take charge of the fundraising and collect donations from the well-wishers on their behalf. For questions, kindly contact our hotline at 016-419 2192 and 019-232 2192.