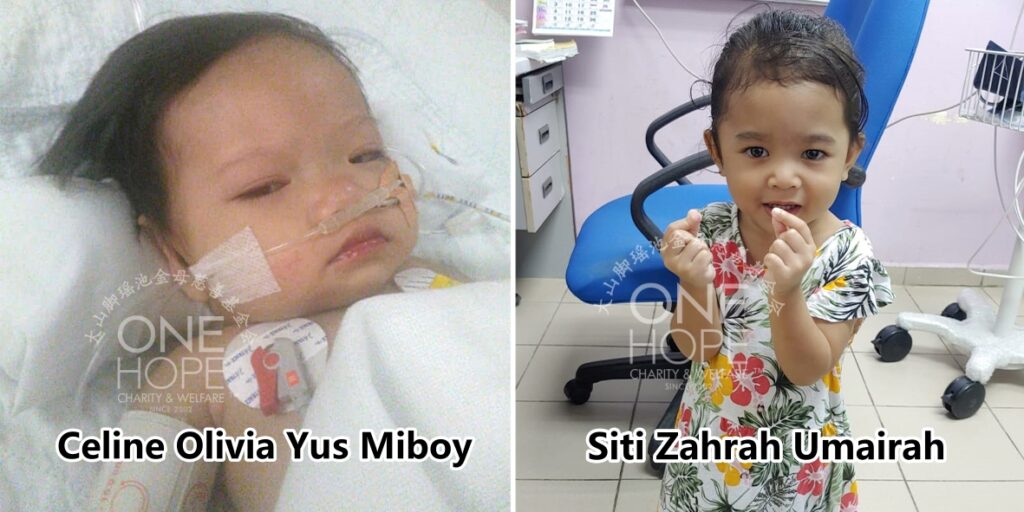 One-year-old Kadazan girl Celine Olivia Yus Miboy from Kota Kinabalu, Sabah, was sent to the incubator due to premature birth. She was later diagnosed with heart defect as she suffered from abnormal breathing. She will suffer from cyanosis and hypoxia at any time. She underwent a surgery to place a stent when she was five months old, and now, she needs RM80,000 for a second surgery to save her life.

Two-year-old girl Siti Zahrah Umairah Binti Umar Zuhdi Arwani from Negeri Sembilan, was born with a murmur in her heart. An examination confirmed that there is a hole in her heart. After waiting for more than a year, the hole has not been closed, so she needs a heart repair surgery. However, she is still short of RM25,000 in surgical fees.

【Case 1: The father had no money to buy a plane ticket and could not accompany her, so the mother flew to West Malaysia with the daughter with heart defect to seek medical treatment】

Kadazan girl Celine Olivia’s mother suffered from anaemia during pregnancy. She was born premature at the 32th week, and was rushed to the incubator. Two weeks later, the doctor discovered that her breathing was abnormal, and examination revealed that she suffered from Tetralogy of Fallot (TOF). Her condition was critical, and she had a right ventricular outflow tract (RVOT) surgery to relieve her condition in October last year.

As the baby girl was too small at that time, she needed to wait until she is one year old for the heart repair surgery. Two months ago, the baby started to experience shortness of breath, and her lips and fingers became cyanotic when she cried. A test found that her blood oxygen dropped drastically, and she also has lung infection. She was hospitalised for more than a month and relied on a breathing aid.

The doctor in East Malaysia referred her to a specialist hospital in West Malaysia for surgery. Without the surgery, her heart will eventually fail.

Her 33-year-old father Yus Miboy Yusri is a motorcycle repair mechanic, earning about RM1,000 a month. Her 26-year-old mother Faridah Munin is a housewife. The couple have three other children, aged seven, five and three.

When the mother was pregnant with Siti Zahrah Umairah, a girl from Negeri Sembilan, everything was normal. However, the doctor discovered that the baby girl had murmur in the heart after she was born, and she was put under regular observation. When the baby was one-year-and-six-month-old, the doctor said the murmur still existed. She was referred to the National Heart Institute (IJN) for examination at the end of last year. The result showed that she suffered from patent ductus arteriosus (PDA) and needed a heart repair surgery.

The surgery was originally fixed in August this year, but the parents had to postpone the surgery due to lack of fund. As the girl’s situation could not be delayed any longer, they had no choice but to seek help from One Hope Charity.

The child has always had no symptoms in the past, but her face was a little pale, and she did not suffer from hypoxia and cyanosis. However, the parents are worried as the child’s condition is like a time bomb. Furthermore, they are worried as they are unable to afford the RM25,000 in surgical fee.

Her 26-year-old father Umar Zuhdi Arwani Bin Ahmad Helmy is an odd job worker at the construction site, earning about RM2,600. Her 25-year-old mother Siti Azyantie Binti Solihin is a housewife. The patient is their eldest daughter and the mother is now seven months pregnant and she will give birth to a baby in November.

After reviewing the case, One Hope Charity decided to help the two girls in raising the medical expenses they need. The two need a total of RM105,000. Both the families agreed to fully authorise One Hope Charity to take charge of the fundraising and collect the donations from the well-wishers on their behalf.