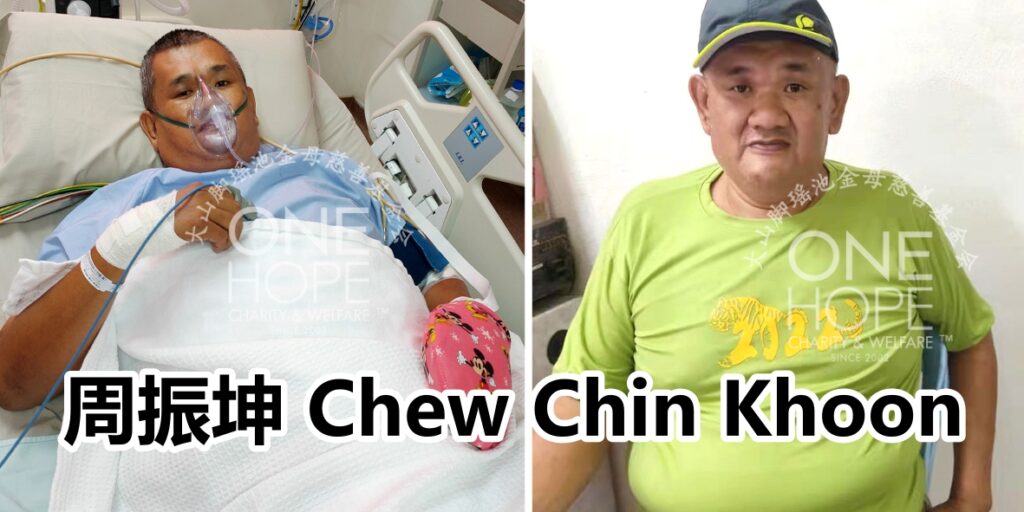 A Chinese unmarried man, who has been self-reliance, collapsed while he was reloading his mobile phone credit at a shop a few days ago. He was sent to the hospital for examination and was diagnosed with a stroke. He needs to receive treatment within the golden window to reduce the sequelae caused by brain cells damage. He is still short of RM40,000 in medical expenses, and his family hopes that the public can lend him a helping hand.

52-year-old unmarried man Chew Chin Khoon from Tambun in South Seberang Prai went to a shop to reload his mobile phone credit last Sunday. He suddenly collapsed and fell to the ground, and shocked the people around him.

A friend who was with him quickly contacted his niece, as well as called an ambulance immediately. When his niece rushed to the shop which was located nearby, Chin Khoon was already lost his consciousness, and he did not respond when his niece tried to slap him on the face to wake him up. When the ambulance arrived, he was rushed to the hospital.

His only niece Tan Chee Wan said that the doctor who examined her uncle confirmed that he had a stroke. The doctor conducted thrombolysis but it wasn’t effective. The doctor suggested him to undergo mechanical thrombectomy as soon as possible to minimise the risk of brain damage, as well as reducing the sequelae caused by stroke.

However, the surgery cost RM62,000, and his insurance can cover up to RM31,000 and his family members cannot afford the remaining fee. His niece Chee Wan approached One Hope Charity for help. After a quick review of his case, One Hope Charity decided to assist as he has very high chance of recovery.

Chee Wan told One Hope Charity that Chin Khoon is her only uncle and she is his only niece. They have been very close since she was small.

“Although my uncle is unmarried, but he has been self-reliance. He also takes good care of my mother, who is his sister. They rent a house together, take care of each other, and he also pay for my mother’s meal expenses. And now, he has a stroke, and all of us are very worried. We hope that he can get well soon.”

Chin Khoon was a lorry driver before he suffered a stroke, with a monthly income of slightly over RM2,000. His niece is married and is a hawker, earning slightly over RM1,000 a month. After reviewing the case, One Hope Charity decided to help Chin Khoon in raising a total of RM40,000, comprises of the remaining surgical fee of RM31,000, three months’ physiotherapy fee, acupuncture, supplements and other expenses which sum up to RM9,000.

His family agreed to authorise One Hope Charity to take charge of the fundraising and collect donations from the well-wishers on their behalf.