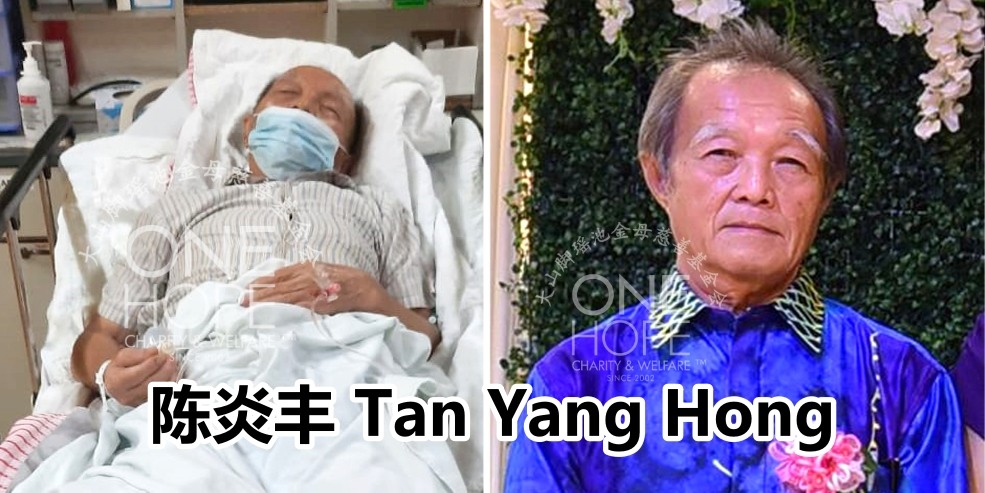 A 70-year-old man who never had any sick before was found lying on the ground unresponsive, frightening his wife and son. He was confirmed that had a stroke and need emergency surgery after sending to the hospital. His family only can afford RM20,000 of the surgery fee. The lack of RM40,000 surgery fee is looking forward to public donation.

The situation is extremely urgent, and stroke patients must undergo surgery to remove blood stasis during prime time. Otherwise, brain cells will be damaged, which will affect their daily life in the future. After receiving a case for help, ONE HOPE CHARITY approves the case immediately, allowing the patient to undergo surgery as soon as possible.

【The father who only had uric acid problem, unfortunately, suffered from a sudden stroke. The children were helpless and worried about the father's condition. 】

Tan Yang Hong (70 years old) from Bukit Mertajam, Penang massage his right hand at 1 pm on February 14. Tan Yang Hong was no responding when the son asked about his condition. After that, his son found him lying unconscious on the ground at 3 pm. The family was called an ambulance to send him to the hospital, and the examination resulted in he was diagnosed stroke. The doctor recommended undergoing mechanical thrombectomy, the operation cost required RM60,000.

Tan Yang Hong was originally a lorry driver. In 2017 flood caused damage to his dilapidated lorry, so he was confirmed to retire after selling the lorry. He and his wife Quek Chu Naai, a 65-year-old tailor, have 3 children. All 3 children have their own burdens, and they can only afford the operation fee of RM20,000.

After reviewing the case, One Hope Charity decided to help Tan Yang Hong in raising the medical expenses he needed. His family members agreed to authorize One Hope Charity to take charge of the fundraising and collect donations from the public on their behalf.