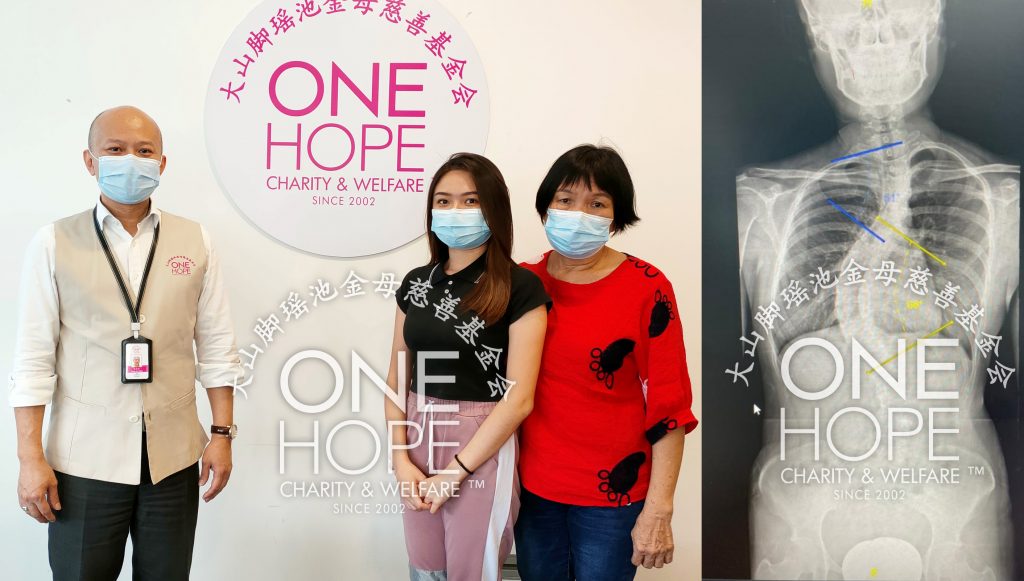 Chiew Zhi Chi suffers from a harsh fate: Her father passed away when she was young and she showed signs of scoliosis when she was 12. The mother was worried of the risks for the surgery, hence she only took her daughter for massages. Sadly, after over 10 years, her scoliosis had become more severe as her curve is around 66 degrees. If she continues to delay her surgery, there could be a chance that her organs would be affected by her scoliosis.

Chiew is a 21-year-old girl from Negeri Sembilan. She just completed her studies and ready to go to work, but her scoliosis has been tormenting her for many years, making it become a huge obstacle in stepping into the career. She needs corrective surgery at a cost of RM40,000, and she hopes that the public donations would allow her to straighten up her body and step into the workplace with confidence.

When Chiew was just 2, her father passed away. Her mother had to work in Singapore while Chiew and her two sisters were fostered in their aunt’s place.

At the age of 12, Chiew noticed signs of scoliosis on her back, but her mother was concerned of the risk of surgery, so she took her daughter for massage therapy to be more on the safe side.

Sadly, after years of massage therapy, Chiew’s scoliosis problem still has yet to show signs of improvement, but rather much worse to the point it affects her daily life.

【Due to scoliosis, the graduate was not able to find a job】

Due to scoliosis, Chiew can only wear loose clothes just so that outsiders would not notice her back problem and attract unwanted attention.

But at the same time, she could not stand for a long period of time due to her condition, otherwise her body would feel sore. She needs to be lying down on bed to ease her pain. Up until when she got her diploma in November last year, she still has yet to find a proper job.

Chiew understood that if this goes on, this would severely impact her daily routine, so she did her own research and found out that scoliosis correction surgery has a high success rate, which gave her a boost of confidence.

Chiew had approached to seek a spine specialist for treatment at the beginning of 2021. After a careful examination, the doctor confirmed that her spine had a curvature of 66 degrees and she needs to undergo surgery to solve her scoliosis problem. However, the surgery cost RM40,000.

Chiew graduated last year and due to her condition, she can only work as a salesperson with only a daily salary between RM100 and RM120. Her income is unstable as she only gets her salary if she works. Her mother Lee Yuck Lan has already retired, while her two sisters are beauticians, with a monthly income of RM2,000. Unable to afford the huge cost, she approached One Hope Charity for help.