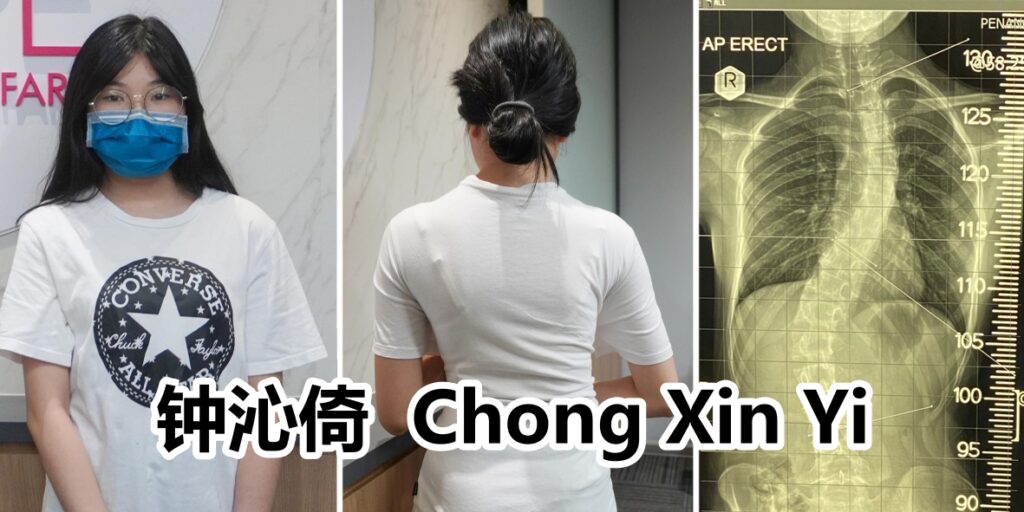 A girl who looked healthy is actually suffering from diseases without her knowledge.

16-year-old student Chong Xin Yi from Bukit Mertajam, Penang, was found to have abnormal gait and uneven shoulders when she was 13. At that time, the doctor told her that the scoliosis was not serious, and the doctor also arranged her to attend follow-up visits once a year. However, her parents found that the scoliosis has become serious recently, and when she went for a test in the specialist hospital, she was told that the curves were 55 degrees upward and 45 degrees downward.

Her parents sought help from One Hope Charity for their daughter’s scoliosis correction surgery. Unexpectedly, during the detailed examination before the surgery, she was found to have tonsillar herniation with cervicothoracic syrinx, which means that the cerebrospinal fluid needs to be drowned out, and also urgent arrangements for foramen magnum decompression tonsillectomy and duraplasty, followed by her scoliosis correction surgery. The two surgeries cost a total of RM75,500.

If the girl does not undergo surgery, the cerebrospinal fluid will make her impossible to get her scoliosis correction surgery, and if the scoliosis worsens, compression and contortion of her internal organs might happen, which would put her life in danger. Her parents hope that their daughter can undergo the two surgeries safely, and they also look forward to donations from the public.

【Knowing that she suffers from scoliosis, the girl bear all her pains alone without wanting to worry her parents. Even if she is in pain during treatment, she will just sheds tears instead of crying or complaining】

When Xin Yi was 13 years old, her parents noticed that her shoulder blades were protruding, and they brought her to a hospital for a check. The doctor then told them that Xin Yi had a some 10-degree curve in her spine but it was fine. Her parents were worried and consulted a specialist again, and was told that the curvature was more than 30 degrees and needed a physiotherapy. However, due to the Covid-19 pandemic outbreak, the physiotherapy sessions were conducted on and off.

After two years, at the end of 2021, a friend suggested them to go to a specialist hospital again, and the doctor told them that Xin Yi’s situation could only be treated with surgery. The parents then came forward to One Hope Charity for help and advice.

Xin Yi was arranged to for a detailed examination and found out that she has hydromyelia, but fortunately, it was discovered in time and can be given treatment in time, otherwise, there would be a risk of paralysis if the scoliosis correction surgery was performed without knowing about the hydromyelia. Xin Yi had been scheduled for a surgery on January 20, and an examination will be carried out three months after the surgery. If everything goes well, her scoliosis correction surgery will be arranged.

Her 45-year-old father Chong Boon Pin is an odd job worker laying wooden floor tiles. His work is unstable and his income has been greatly affected by the pandemic. Her 46-year-old mother Tan Hooi Kheng is a quantity surveyor earning about RM4,000 a month. The couple has two other children, aged 13 and 8.

After reviewing the case, One Hope Charity decided to help her in raising the RM75,500 for medical expenses. Her family agreed to authorise One Hope Charity to take charge of the fundraising and collect donations from the well-wishers on their behalf.