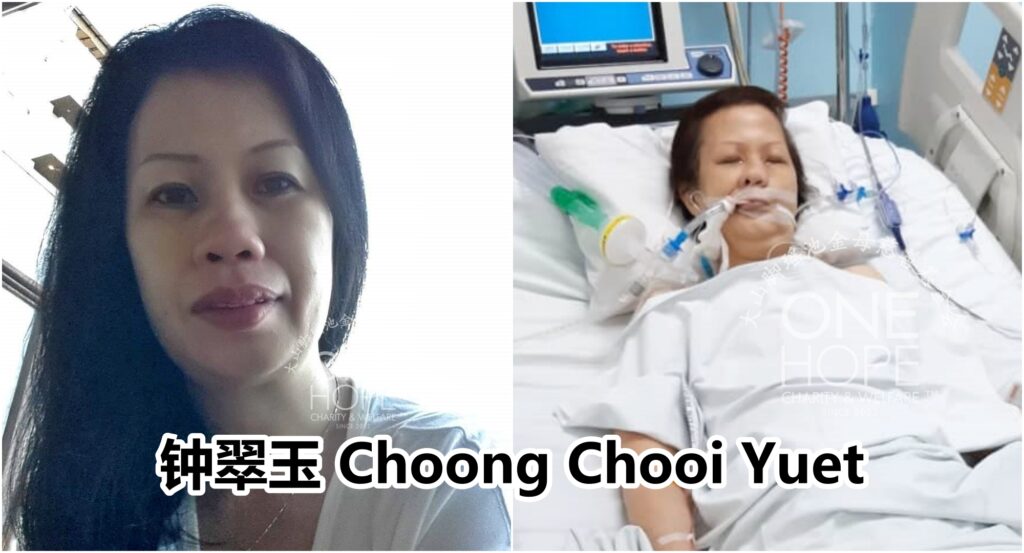 Choong Chooi Yuet, 55-year-old, from Penang was diagnosed with breast cancer 6 years ago. Due to the cancer cells had spread into other parts of body and then she was referred to Palliative Care by doctor. However, with support and encouragement from husband and 4 daughters, she was strong and had a positive attitude against cancer. Fortunately, the tumour was successfully removed, and radiotherapy and chemotherapy were also completed.

After 6 years of treatment, she and her husband have exhausted their savings of more than RM400,000. Now she needs to take targeted medication to control cancer cells. Her daughters are pleading the public help for their mother.

【She had underwent surgical removal of mammary gland, part of lung, and brain tumor. She still never gives up her life. Please give her a chance!】

Many years ago, Choong Chooi Yuet found a lump in her breast, but she ignores it. In 2016, she went to the hospital for check-up due to hair loss. The report showed that she had stage 3 breast cancer. But she decided to hold the surgery and seek other treatment. Because her family member had passed away during surgery and this caused she afraid of the surgery.

Unfortunately, her condition became worsened, and the wounds were bleeding. Examination reporte showed that cancer had spread to the liver, lungs, lymph, and brain. In 2018 and 2020, she had completed breast and lung tumour surgery.

Meantime, she was also preparing for a liver tumour resection. Unexpectedly, it was discovered that the cancer cells had engulfed the liver, causing the liver to lose 85% of its function.

The doctor said there was nothing he could do and referred Choong Chooi Yuet to the Palliative Care. The doctor also asks her family to make final preparations. But the family didn't give up. The family always give support and persuades her must have an optimistic attitude. Fortunately, the four daughters are also very sensible and well-behaved, taking care the mother in shifts routine.

In April this year, Choong Chooi Yuet's hands and feet were frequently paralyzed, and she once had epilepsy. It was found that there were two tumours of 2.4 cm and 2.8 cm in the brain. The tumours were too close and squeezed. If not treated in time, it will affect the eyesight and mouth. Therefore, she had underwent surgery on 15th April.

After the operation, she also required to undergo radiotherapy, and then she needed to take targeted medication to inhibit the spread of cancer cells. The targeted medicines need to be taken for a year. It cost as much as RM54,500, which the family can't afford.

Choong Chooi Yuet had chosen to give up treatment many times due to financial problems. With the encouragement of her family, she regained her determination to fight with sickness. Therefore, she begged the public for assistance.

Ng Hong Kuang (husband of Choong Chooi Yuet) and Choong Chooi Yuet, operated a chain of shoe stores in shopping malls earlier but closed it because the brand owner wanted to withdraw from the Malaysian market. They faced financial problems and always borrowed money from relatives and friends. At last, her husband becomes an e-hailing driver to earn an average income of about RM3,000.

Earlier on, due to poor business turnover, Choong Chooi Yuet terminated all insurance on her own, resulting in no insurance coverage for her cancer treatment.

They have 4 daughters—the eldest daughter taking care of her mother and selling homemade cakes online. The second daughter worked as an analyst in a factory with a salary of RM3,500, and the third daughter had just completed her education in diploma. The youngest daughter is still in the third grade of junior high school.

After reviewing the case following a home visit, ONE HOPE CHARITY decided to help Choong Chooi Yuet raise the RM54,500 for the medical expenses. Her family agreed to fully authorize ONE HOPE CHARITY to take charge of the fundraising and collect the donations from the well-wishers on their behalf.