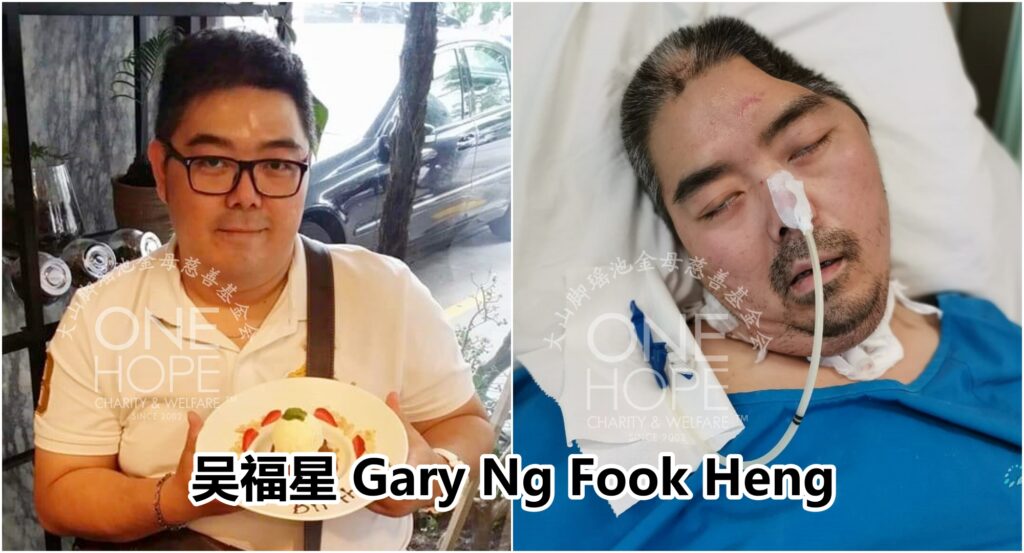 The bachelor cares for his mother by himself, but a car accident complicates life for both mother and son.

42-year-old Gary Ng Fook Heng is a grab car driver who lives with his mother. However, the good times did not last long. Gary was in a car accident on his way back to Penang Island from Seberang Perai a few days ago, resulting in severe head trauma and cerebral hemorrhage. After an emergency craniotomy to remove accumulated blood, his life was successfully saved.

Gary was hospitalized for nearly a month before undergoing skull bone flap surgery after his condition stabilized. The family, however, was overwhelmed by the enormous medical expenses. His mother and sister were desperate and sought assistance from ONE HOPE CHARITY.

【Gary Ng is tall physically. He used to look after his ailing mother and treat her with filial piety. Now that he is disabled as a result of a road accident, his family is in ruin due to the immense financial strain】

Gary was in a road accident near the entrance to the Second Bridge on his way back from 'Seberang Prai Selatan' to Penang Island on the evening of November 6. The worried friend ultimately made the choice to transfer him to a specialised hospital in an effort to quickly remove the blood buildup.

The doctor performed a craniotomy on Gary to remove the blood stasis, and he replanted his skull after nearly a month.

The doctor informed the patient that he would need to recover for another 6 months after being discharged from the hospital. Because the current situation is unclear, Gary anticipates staying in a nursing home for at least 6 months, depending on the circumstances.

Gary used to work in a mobile phone shop, but in 2017 he became a grab car driver with a salary of about RM2,000. His father has passed away, and his 62-year-old mother earns a meager income by cleaning. The two mother and son live together in the HDB flat.

Gary adores his family and is always willing to assist his mother and sister in their time of need, but he is currently involved in a car accident. The elder sister is married, but her financial situation is mediocre, and she is powerless to help her younger brother with his medical expenses.

Because the patient's body size is large, his mother and sister are unable to turn him over, clean him up, and care for him, so Gary must be placed in a nursing home for at least 6 months after he is discharged from the hospital.