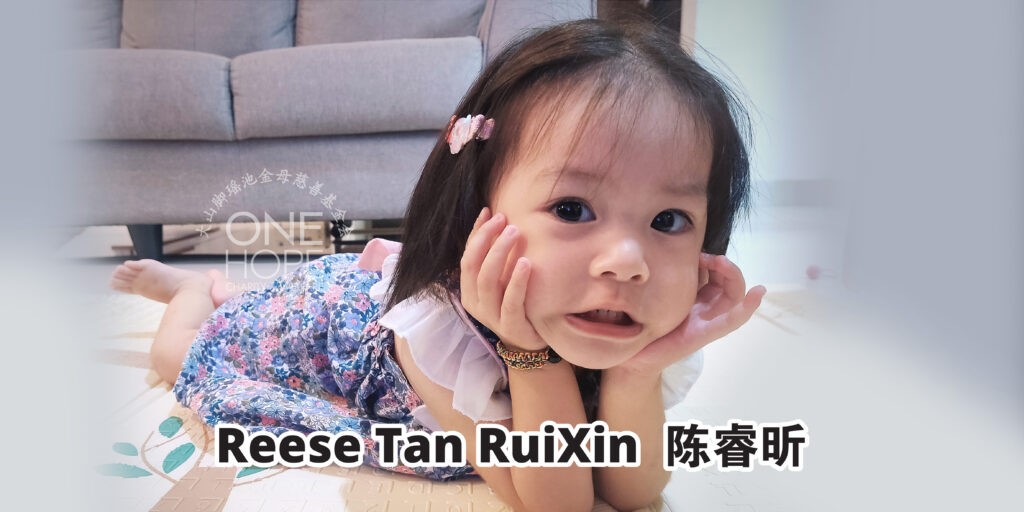 She has big black eyes and a chubby little face. She always shows her heart-melting smiles. However, this cute little girl suffers from a rare genetic disorder and needs an astronomical price to save her priceless life!

Reese Tan RuiXin, a 17-month-old girl, suffers from Spinal Muscular Atrophy (SMA) – a rare genetic disorder. SMA is not an incurable disease, but it requires substantial medical expenses to treat it.

Little Reese still can’t crawl, stand or walk. She can only lie on her stomach. If she does not receive treatment, she will experience muscular dystrophy and gradually become paralysed. The condition will also affect her lung function and cause breathing difficulty, which may pose a danger to her.

Her 38-year-old mother, Rachel Chung, said that her family longed for the arrival of little RuiXin when they knew she was pregnant. She also told her husband that the family would dress up in parent-child outfits and travel together. She also dreamed of dressing up her daughter beautifully and taking many pictures with her.

“After a full-term pregnancy, Little Reese was born safely on 10 July 2021. Our family welcomed her with joy.”

She said Little Reese is the apple of the eye of the family, and she always brings laughter to them. Unfortunately, the good times didn’t last long. Reese could only lie on her stomach when she reached the stage where she was supposed to learn to crawl and stand. Her anxious parents took her for treatment. She underwent various examinations and was diagnosed with a life-threatening genetic disorder called Spinal Muscular Atrophy – Type 2.

【SMA is not an incurable disease, but the medical expenses are rocket high. She also needs to administrate the medicine before turning two】

The Zolgensma gene therapy is the most suitable treatment for Reese based on the family’s survey and the doctor’s recommendation. The US FDA approved the medicine in 2019, the world’s first gene therapy for SMA treatment.

The medicine targets the survival of motor neuron 2 (SMN2), which stimulates the child’s missing gene, and a child will only need one dose for a lifetime. However, one dose of the medicine costs €1.9mil (1.9 million euros), equivalent to almost RM9mil (9 million in Malaysian Ringgit).

【The little girl is racing against time. She only needs a jab to continue living】

Her treatment is a race against time. Little Reese needs to administer the jab before she is 24 months old. Otherwise, her lower body muscles will gradually atrophy and become paralysed. The condition will spread until she cannot swallow and breathe.

Reese is now 17 months old, which means she is only seven months away from turning two. She needs to race against time to receive the treatment. They need to raise enough money for the medicine and contact the pharmaceutical factory to arrange transportation and customs clearance of the drug and other related matters.

Once she completes the Zolgensma gene therapy, the parents can afford the expenses of the adjuvant treatments and follow-up visits.

The parents insisted on finding a treatment plan for their daughter. On the one hand, they hope that their daughter can receive proper treatment, and on the other hand, they also hope to draw the public’s attention to this rare genetic disorder so that the Health Ministry can subsidise patients with this disease.

【What is Spinal Muscular Atrophy (SMA)?】

SMA is the number one genetic disorder killer of infants under two years of age. The main symptoms of the patients are muscle atrophy and weakness all over the body, and the body will gradually lose various motor functions, resulting in breathing and swallowing difficulties and death to the patients.

SMA is an autosomal recessive genetic disorder. In the general population, about one in every 50 people is a carrier of the disease-causing gene, regardless of gender. If both parents are carriers, the child in every pregnancy will have a 25% chance of getting this disease and a 50% chance of becoming a carrier like the parents. They have a 25% chance of being completely healthy. The incidence of SMA in newborns is 1/6000 to 1/10000. The pathogenic gene of SMA is precise. Genetic tests can not only diagnose patients with the disease but confirm the carriers and block new cases through prenatal inspections.

Family agrees to allow ONE HOPE CHARITY to take charge of the fundraising and at the same time, accumulating the donations from the public.  One Hope Charity & Welfare does not take any commission from this fundraising. All the money raised will be solely used for Reese's medical expenses.For enquiries, please contact our careline at 04-5399212, 016-4192192 or 019-2322192.