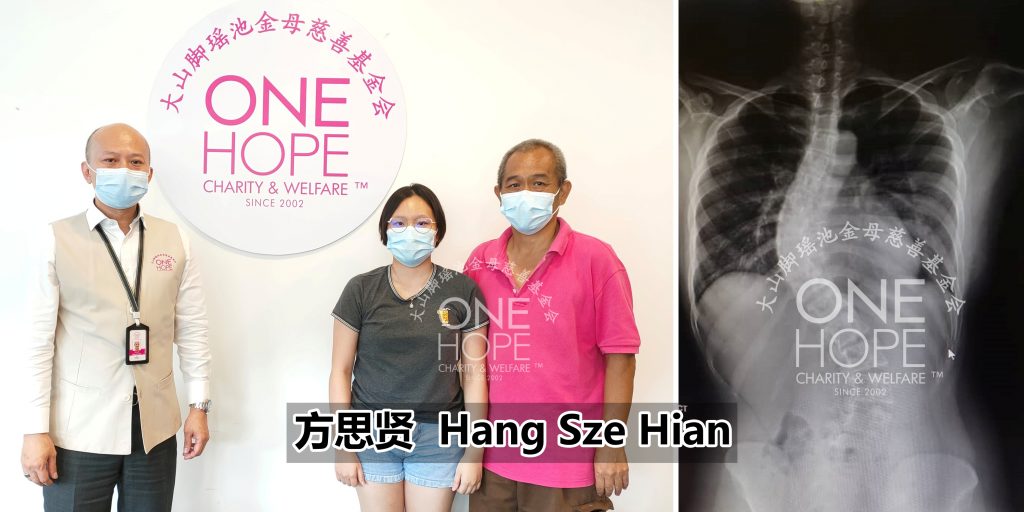 A university student was diagnosed with scoliosis with a 60-degree curve in her spine. She needs a surgery at the earliest possible time to avoid her condition from getting worse which will increase the risk of her getting surgery. The 21-year-old girl who is pursuing Chinese  Studies at Universiti Malaya needs your help urgently, hoping to recover before she steps into the society.

Hang Sze Hian, 21, from Subang Jaya in Selangor knew that she has a curve in her spine since she was in secondary school. However, she was told by her doctor back then that her situation was not serious.

When Sze Hian started her tertiary education, she utilised her medical privilege for students to go for a check-up. Doctor told her that the curvature of her spine is now 60 degrees and if she’s able to undergo surgery immediately, the risk factor would be as low as 1%, but the risk would increase to 10% if the curvature reaches 70 degrees.

After knowing her present condition and the need of getting surgery, she was shocked and cried for several days. Initially, her parents also refused the surgery as they were worried about the risk. After listening to the explanations made by the doctor and put every factor into consideration, her parents finally agreed to allow their daughter to undergo the surgery. However, they could not afford the RM40,000 surgical fee, hence they approached One Hope Charity for help.

【Often felt short of breath and tired even when she just walked a few steps since she was a teenager. It was all caused by the curve in her spine】

Sze Hian realised that her shoulder blades was uneven, and her spine was curved when she was still in secondary school. She went to a clinic for treatment and x-ray, but the doctor told her that her condition was not serious. She was not asked to do any further treatment back then.

Upon completion of her secondary education,  she got a placement at Universiti Malaya. She visited the university’s clinic in April and was referred to University Malaya Medical Centre for assessment. Doctor told her that the upper part of her spine has a 60-degree curve while the bottom part has a 57-degree curve, and she needs to undergo surgery as soon as possible because the risk increases as her condition worsens.

Sze Hian said that since a surgery is needed sooner or later, she prefers to undergo the surgery when the risk factor is lower. Furthermore, she just started her tertiary education, and she could still cope well with her studies. Her parents could also take care of her during the recovery period; therefore, this is the best timing for her to undergo the surgery.

She also requested that the surgery could be done during her three-month-long semester break so that her studies would not be affected.

She decided to pursue in Chinese Studies under the encouragement of her father. She is a diligent and ambitious student, hoping to join the media industry upon completion of her tertiary education. The surgery is crucial for her as scoliosis would affect her life in future so she pleas for help from the public.

Her 58-year-old father, Hang Weng Choon is a private car driver. He used to send children to school and earned about RM2,000 a month. However, he has almost no income since MCO which started last year as students are not allowed to attend classes at school most of the time. Her mother Tay Ai Lee, 56, works as a babysitter earning about RM1,000 a month. Her 28-year-old elder brother is a salesperson, and her 26-year-old sister is still pursuing her master’s degree in Chinese Studies. The financial burden of the family falls on her elder brother and Sze Hian does not have insurance coverage. Her family does not have extra money to pay for her surgical fee.