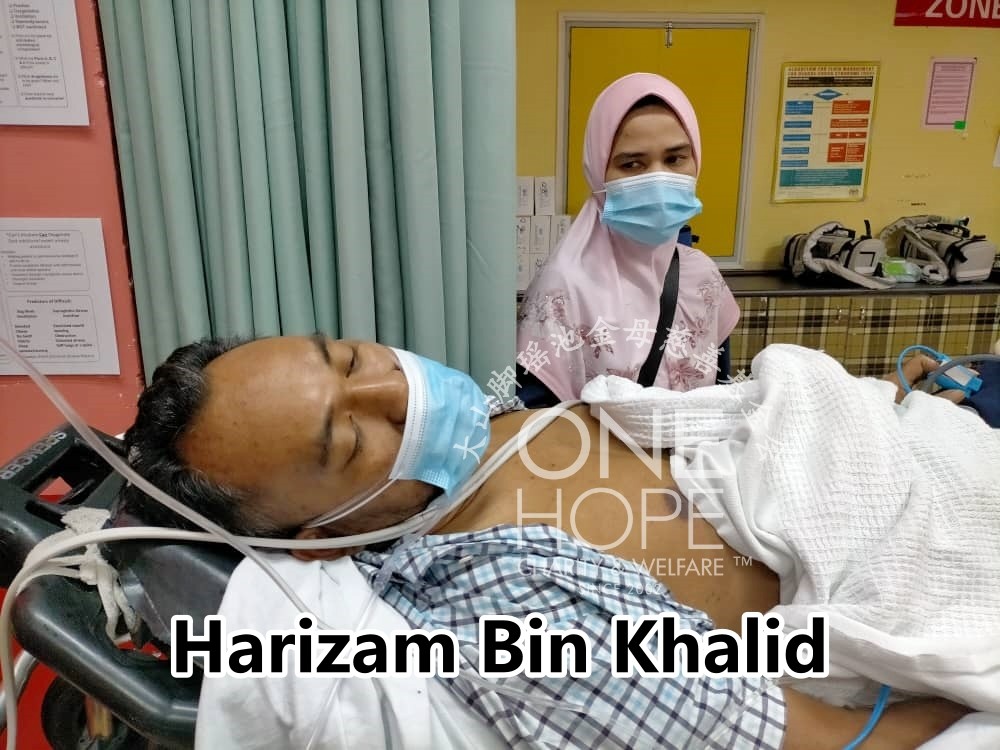 “As long as my husband is safe, I don’t mind to take care of him for the rest of my life. I just want to have him to stay with me.” Those were words from a wife’s heart when she learnt that her husband suffered from stroke.

The 43-year-old head of his family, Harizam Bin Khalid was found paralysed on one side of his body during his lunch break. His mouth drooped to one side and he was unable to speak. Therefore, his relative rushed him to the hospital. Preliminary tests confirmed that he suffered from cerebrovascular obstruction, and he is in urgent need to undergo mechanical thrombectomy. However, there is only one specialist hospital in Penang that conducts the procedure, and the surgical fee is RM50,000.

His 42-year-old wife and 18-year-old son rely on their husband and father a lot. They were at a loss when they learnt about the sudden news. Furthermore, they were worried about the huge medical expenses. With the help of their relative, the family approached One Hope Charity for assistance.

The family has lost its emotional and financial support. They were uncertain about their future. Their only hope is to save the life of their husband and father. They hope that the public could help to save the family.

【The family of three operates an eatery together. The operation of the family has been affected since the husband fell ill】

The family of three runs a food shop together and they were living happily. However, the husband suddenly fell ill, which affected the operation of the whole family.

43-year-old Harizam, together with his 42-year-old wife Rosliza Bt Abdul Wahab and their 18-year-old son run a food shop in their kampung. Three of them have their own duties in the shop. The husband is responsible for cooking, while the wife and son are responsible for drinks preparation, ushering the customers and preparing the food ingredients. Although they had to stop their business for two months due to the Movement Control Order, but they were still able to cover their living expenses.

After the temporary shutdown of business for two months, the government loosen the restrictions for businesses. The family was well-prepared for their business on August 7. When Harizam was enjoying his lunch break and afternoon rest as usual before starting the business for the evening, his son suddenly found out that his father, who was lying on a bed, could not speak. Half of his body was paralysed and his mouth drooped. The son immediately contacted their relative for help to send him to the hospital.

Upon arrival at the Seberang Jaya Hospital, he gone through detailed examinations and confirmed that his cerebrovascular was obstructed and needed urgently to be transferred to the only specialist hospital in Penang that can perform mechanical thrombectomy.

The family is not well-to-do. Harizam struggled to support his family. The huge medical fee is a burden to the family as they could not afford it.

Their relative came forward to One Hope Charity to seek help. Harizam’s treatment is a race against time as the delay in treatment might risk his life. After a preliminary review, One Hope Charity decided to give fast approval so that he could receive treatment immediately. The organisation also agreed to help him in raising the RM50,000 surgical fee.

The family agreed to authorise One Hope Charity to carry out the fundraising for Harizam, as well as to collect donations from the well-wishers on their behalf.