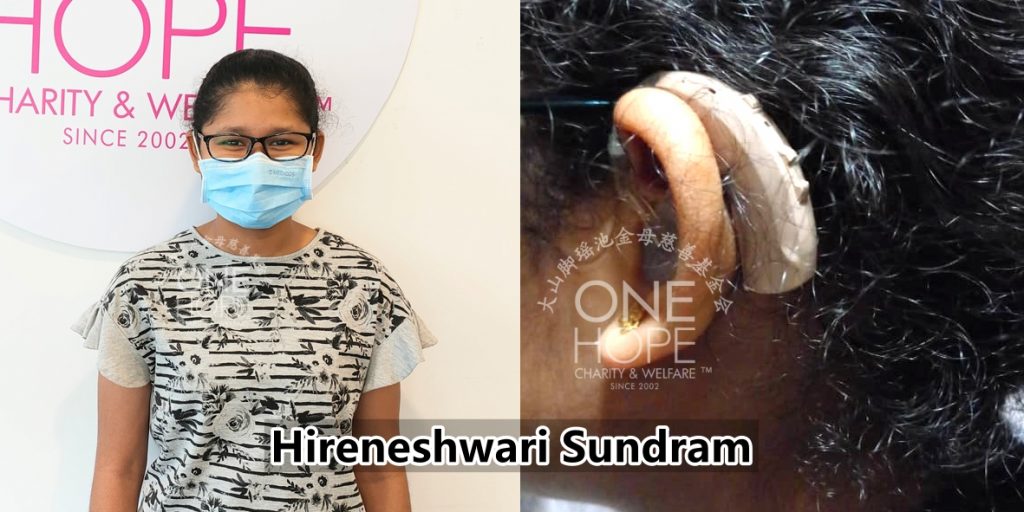 A young girl from Klang, Selangor, was born deaf. When she was two, she received a cochlear implant on her right ear, but she can only barely hear the sounds. Despite all odds, her education was remarkable from kindergarten to high school. Her single mother hoped that her daughter could get another cochlear implant on her left year before she is put into the working society. According to the doctor's examination, she is in a suitable condition to have the implant. What is short now was the medical fee of RM61,200.

When Hireneshwari Sundram was three months old, her mother noticed that she could not hear any sounds from the outside world. Hence, she brought her to the hospital for checkup, which later confirmed that she is completely deaf.

The family were very worried that her hearing loss could severely affect her growth. Luckily, the doctor has found a suitable artificial cochlea, which would benefit her hearing abilities in the long run. She got her cochlear implant on her right ear at the age of 2.

Afterwards, Hireneshwari’s family arranged for her language therapy sessions, in an effort to develop her speech. However, with only one side of her hearing was done, her speech development was at a snail’s pace. She only managed to speak when she was 4.

For the past several years, Hireneshwari Sundram has been performing well in her academic studies in kindergarten and primary school with her weak hearing. This year, she is currently in Form 4, and to her single mother, she is a diligent and hardworking child.

However, what worries her is that she can barely hear anything with her right ear, while her left ear is still completely deafened. There have been instances when she was nearly hit by an incoming vehicle because she could not hear the honks from her left side of the road. Hence, the mother has always been there by her side.

“There are also a lot of times I’ve called her name behind her but she could not hear me. I just hope that she can get her left ear with the cochlear implant before she goes out by herself, because I won’t be here by her side all the time.”

All these while, Hireneshwari Sundram has been getting her regular medical checkup. According to the doctor, they have identified a suitable cochlea for the left ear of the 16-year-old girl, but the single mother could not bear the medical fees, hence she appealed to One Hope Charity for help.

Hireneshwari’s parents had a divorce 12 years ago. The mother Jayanthi Seenivasan was formerly a tuition lecturer and has been single-handedly caring for her daughter. She used to have a monthly income of RM1,500 but her income sharply decreased due to the MCO, and was unable to bear the fee.