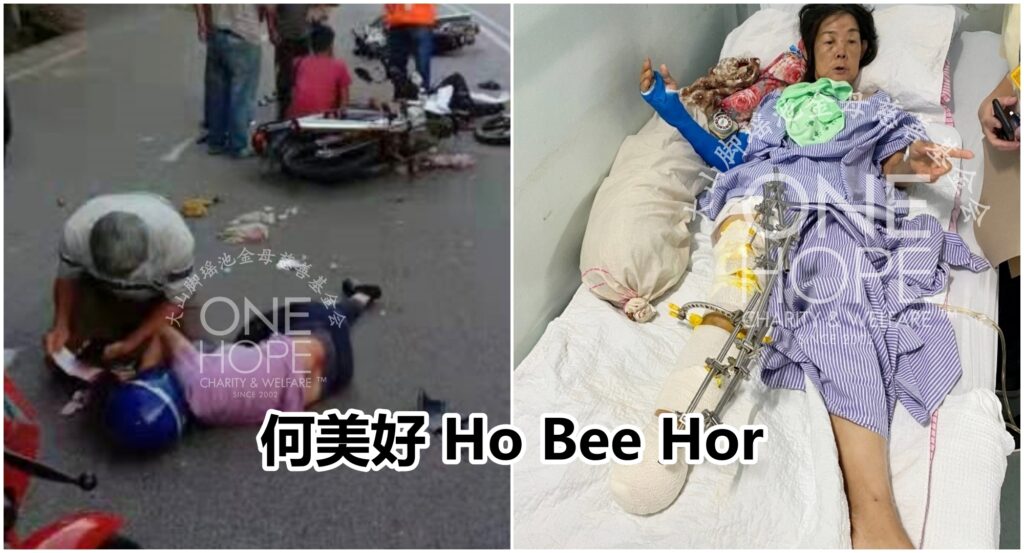 A 65-year-old woman, Ho Bee Hor chose not to marry in order to take care of her parents when she was young. Although she remains single, but she has always been supporting herself through hard work. However, her bones fractured in an accident, and she had to be bed-ridden pending recovery. Her toes and half of her foot were amputated due to necrosis. She stayed in the hospital for a month, and she felt hopeless and did not want to become a burden to others. She even wanted to give up her life.

It was not until ONE HOPE CHARITY decided to help her with the expenses of the nursing home and the cost of cleaning her wounds in the future, that she regained the hope for life. She hopes that she can continue to serve in the nursing home after she recovers. Although ONE HOPE CHARITY only raises RM90,000 to fund her stay in a nursing home, wound cleaning, hospitalisation and other medical expenses for five years, but the One Hope Charity promised to take care of her until the last day of her life.

On 12 December last year at about 4pm, Bee Hor met with an accident at Jalan Kulim, Bukit Mertajam. An eyewitness claimed that she was hit by two motorcycles. When she regained consciousness, she found herself lying in Bukit Mertajam Hospital with multiple bone fractures in her limbs, and she was referred to Seberang Jaya Hospital twice for bone and tendon grafting surgeries.

Her toes and soles of her right feet eventually became black and as everyone was happily welcoming the New Year, Bee Hor was forced to undergo a surgery to amputate her toes and half of her feet. She also needs to clean the wounds on her thighs and take special care of the wounds every day. Her right leg, which was cast in plaster and positioned on an iron frame, also needs time to recover.

The doctor allowed her to be discharged on 4 January. However, she had been staying at a friend’s house in the past, but now, she is bedridden and needs to be taken care of by the others as she is unable to take care of herself. She was very upset, and she did not want to become a burden to others, so she wanted to give up her life many times until her friend approached ONE HOPE CHARITY for help.

Bee Hor was a tailor, and she took care of her parents until they were in their 80s. She also used to work as a babysitter, helped to take care of her friend’s children. She stayed at the friend’s house before the accident and earned a meager income by doing some odd jobs (gloves sorting). As her friend also needs to work and support the family, no one could take care of her after the accident. Although Bee Hor has siblings, but they are already old and weak, and are unable to help her. Hence, Bee Hor had nowhere to go after she was discharged from the hospital.

After reviewing the case, ONE HOPE CHARITY decided to assist her in raising RM90,000 for the expenses of the nursing home and wound cleaning. She agreed to authorise ONE HOPE CHARITY to take charge of the fundraising and collect donations from the well-wishers on her behalf.