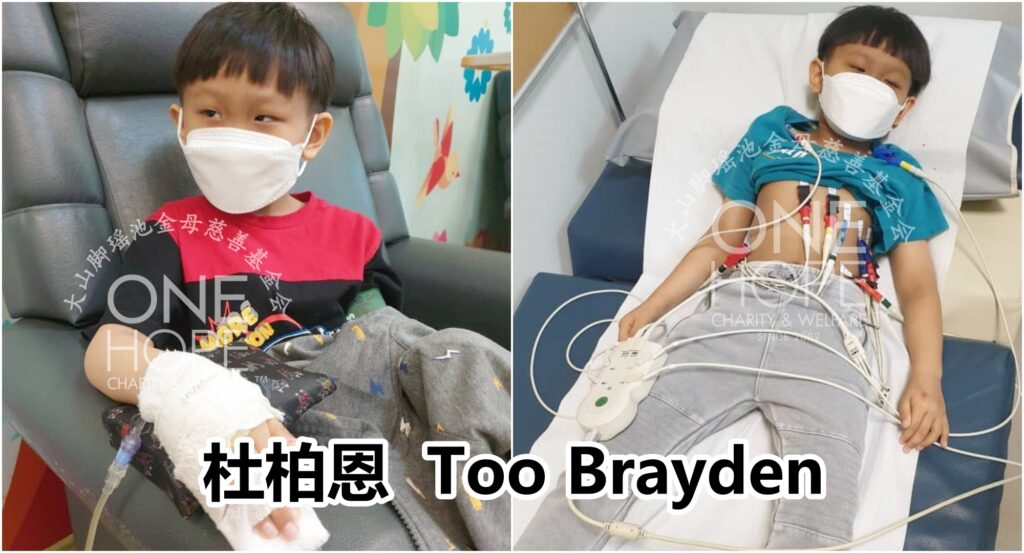 The eight-year-old boy is skinny and pale, and occasionally fatigued. People always thought he did not have enough rest or was suffering from malnutrition. Due to a persistent fever, he went for a blood test, and his blood platelet count was low. After repeated tests, he was diagnosed with a rare human genetic disorder called Fanconi Anemia.

Eight years old’s Too Brayden from Puchong, Selangor, has to go for blood test once every two weeks. He also needs blood transfusions every month. However, blood transfusion is not a long-term solution for him; the only treatment is bone marrow transplantation.

The doctor has confirmed that the father’s bone marrow is suitable for transplantation. He is also more than happy to save his son, but he cannot afford the shortfall in surgical expenses of RM74,153. The Too family pleads with the public for help and to give their son a chance to survive.

【Brayden has a twin brother, but his younger brother died after 28 days of birth. He had congenital heart disease and had undergone life-saving surgery. However, his life is rough as he is now diagnosed with a rare genetic disorder. Fortunately, he has another chance to survive】

Eight-year-old Brayden is the elder brother of the twins. His mother had an emergency caesarean section before the eighth month of pregnancy due to the slow heartbeats of the babies, and the two premature babies were sent to the incubator at birth.

Unfortunately, the younger brother died after 28 days. While suffering the pain of losing their child, the parents resolutely stayed strong to take good care of their other child.

When he was one, Brayden had a heart murmur and was diagnosed with patent ductus arteriosus (PDA). He had life-saving surgery and spent a few years living healthily.

【Brayden tested positive for Covid-19. He had a persistent fever and was diagnosed with Fanconi Anemia after blood tests】

When he was four, Brayden was skinny and looked malnourished. The doctor conducted a growth hormone test and discovered his hormone was insufficient. When he was about to start the treatment, he underwent a series of tests. The tests showed that his blood platelet count was low. After that, he had a bone marrow extraction, and it was confirmed that bone marrow had a defect in producing blood cells and platelets.

As he was asymptomatic and the treatment cost was high, the boy did not continue with the treatment. In December last year, Brayden tested positive for Covid-19 and had a persistent fever. He was sent to the hospital and then referred to University Malaya Medical Centre for a series of genetic tests. He was later diagnosed with Fanconi Anemia, and the only treatment option was bone marrow transplantation. The medical expenses amounted to RM84,153, but the parents could only afford RM10,000, so there was a shortfall of RM74,153 in medical costs.

Seeing the wounds on their child’s hands due to blood tests and blood transfusions, the parents are sad and helpless.

“Even adults can’t bear the repeated pain from blood extractions. We feel bad for our son. At first, he would cry, but now, he has started to accept the fact. Whenever he knew he needed an injection or a blood test, he would cry silently. It broke out hearts.”

The parents hope the bone marrow transplant can prolong their son’s life so he can grow up healthily.

His 47-year-old father Too Yoon Choy started his own renovation company and works as a renovation contractor, earning about RM5,000 a month. He exhausted all his savings earlier during the movement control order (MCO). His 44-year-old mother Lee Siok Kiang was a graphic designer, but she quit her job to care for her sick son.

Brayden is eight years old and in Year Two, but he weighs less than 12kg. He only has the size of a four or five-year-old child, which makes people feel sympathy.