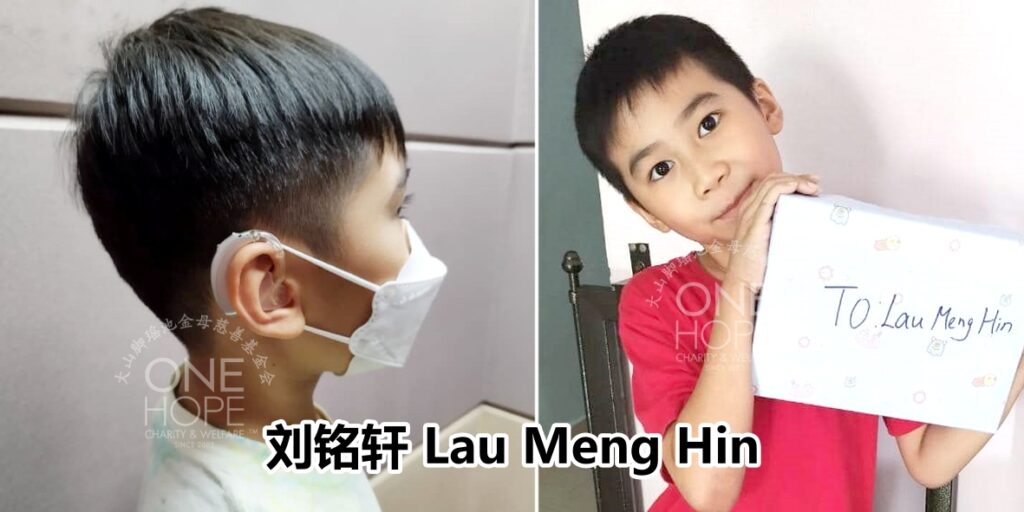 "I want to save money so my son can undergo cochlear implant surgery, but the doctor said I can't drag it any further as my son's auditory nerve will atrophy. If it is the case, my boy will never be able to go for the surgery even if I have the money. I have no choice, and I hope the public can help my boy."

Nine-year-old boy Lau Meng Hin from Ipoh, Perak, is among the best in his class. He speaks clearly and has no communication problems. Little does the other know that he is a child with hearing impairment. His mother works hard to save as much money as possible, hoping to get him a better hearing aid. Unexpectedly, the doctor informed the child needed cochlear implant surgery. His single mother is worried as she cannot afford the substantial cochlear implantation expenses. She hopes to raise RM81,700 so that her son can undergo surgery.

【Cochlear implant is costly, but the mother planned to rely on herself to raise fund for her son to go for the surgery. She gave herself five years to save the necessary fund. However, the doctor informed them that her son could not wait for five years. To prevent her son from auditory nerve atrophy, he needs to get his cochlear implantation as soon as possible】

During the prenatal checks, the baby appeared normal. Lau Meng Hin was born at Ipoh Hospital at full term, weighing 3.98kg. At age three,  his mother put the earphones on his right ear when he was playing with the phone, but he complained that there was no sound. He also changed the earphone to the left ear. His mother was shocked.

Examination revealed that Meng Hin's hearing in the left ear was normal, but he had severe hearing loss of 90% in the right ear. At that time, the doctor informed them that he needed to schedule surgery if he wanted cochlear implantation, so his mother borrowed a hearing aid. The boy gave up wearing the hearing aid after one year as he often had headaches, and the hearing aid always had interferent noises.

Meng Hin's mother understands his situation and adopts one-on-one teaching, so he excels in his studies. At the same time, the mother also works hard to save more money, hoping to buy a hearing aid with higher performance for her son.

Due to the COVID-19 pandemic, schools across the country started online teaching. Meng Hin's teacher discovered that he failed to concentrate and suspended school for a year. At that time, his mother thought that her son neglected his studies as he was addicted to computer games. Last year, he started Year Three and attended school. The teacher appointed him as a school prefect, but the teacher often complained that he did not follow the instructions and made mistakes in his homework. His mother again misunderstood that her son had begun to rebel, and his learning results regressed.

The doctor informed the child that he needed cochlear implant surgery when the mother brought him for a hearing test. However, the mother is worried as she cannot afford the substantial expenses. She planned to save money for five years before allowing his son to undergo surgery.

However, Meng Hin is now nine. The doctor said he needed the surgery as soon as possible as his auditory nerve may atrophy and weaken. Otherwise, the surgery may not be effective. However, the mother can only afford RM25,000.

His 35-year-old mother, Wong Suk Yeen, is an account assistant with a monthly salary of RM2,500. She raised her son independently after divorcing her husband three years ago. To prevent her son from feeling that he lacks love growing up in a single-parent family, the mother does her best to care for him. She also tries her best to meet her son's needs, such as attending drawing and music classes.

The cost of cochlear implantation is huge, so the mother can only seek public assistance. After reviewing the case, One Hope Charity decided to assist Lau Meng Hin in raising his needed medical expenses. His family agreed to fully authorise One Hope Charity to take charge of the fundraising and collect donations from the well-wishers on their behalf. For questions, call One Hope Charity’s hotline at 016-419 2192, 019-232 2192, or 04-539 9212