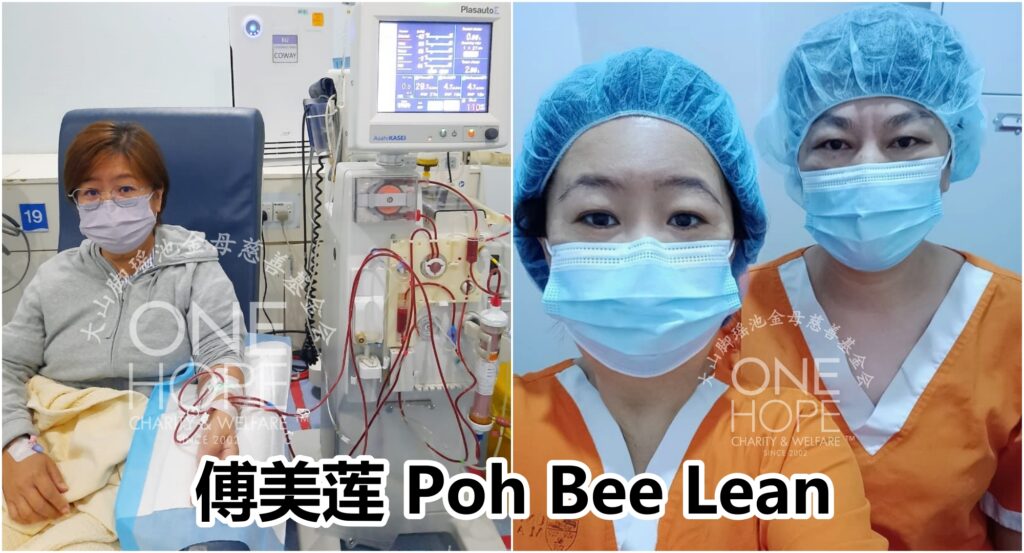 Three besties had known each other for almost 30 years, but one of them had passed on. The remaining two support and love each other like their own sister. Seeing her "sister" suffering from kidney disease and the pain of undergoing dialysis every day, a 54-year-old woman determines to donate her kidney to save her best friend. After various examinations and matching tests, they received the good news that the kidney was suitable for transplantation.

A 54-year-old woman wants to donate her kidney to save her 50-year-old best friend, and the two will share the same kidney. Even though their blood types are different, the donor wants her best friend to have a chance of "rebirth" and to get rid of the suffering of kidney dialysis. However, having a suitable kidney is insufficient as they are still short of RM120,000 in transplantation expenses. The women pled to the public to help them overcome the difficulties.

【Poh Bee Lean accompanied and gave full-time care to her cancer-stricken best friend. She neglected her health alarm of kidney problem. After the death of her best friend, her kidney started to fail, and she needed dialysis】

50-year-old Poh Bee Lean from Kuantan, 54-year-old Goh Kooi Hwa from Perlis, and another close friend met in Terengganu when they were young. Their friendship remains for almost 30 years. They worked together to start their own business, supported each other, and accompanied and cared for each other. The friendship of the trio is a friendship between Damon and Pythias. After the passing of one of the friends, the remaining two cherish and treasure each other even more.

When Bee Lean was in her 30s, she wanted to buy the insurance and had a medical examination. The examination showed that the protein in her urine was too high, so the insurance purchase was unsuccessful. At that time, she did not know the seriousness of her condition and lived as usual. In 2017, her kidney failure was in the third stage. Although she did not need dialysis for the time, she was supposed to take care of her diet.

In 2019, one of the three sisters suffered from stage III ovarian cancer. Bee Lean put down her work and cared for her best friend full-time until her best friend passed away seven months later. Unexpectedly, Bee Lean neglected her health condition. When she went for a follow-up visit in 2020, the doctor informed her that her creatinine level was high. Her kidney functions left at only 4% in 2021, and she needed dialysis immediately. She was shocked to learn that she needed dialysis because she had no discomfort or symptoms.

The dialysis for over a year made her suffer terribly. The medical personnel could not find her blood vessels; her hands were swollen and covered with pinholes and bruises. She had an angioplasty to unblock her blood vessels to facilitate dialysis, and installed an autologous fistula.

【She did not want to see her best friend suffering terribly from dialysis, and Kooi Hwa expressed her willingness to donate a kidney to her. Kooi Hwa went through many stages of interviews to confirm her willingness and examinations to determine the suitability of the kidney; she finally received the good news that her kidney is suitable for donation】

Kooi Hwa witnessed the torment of her best friend undergoing kidney dialysis, so she expressed willingness to donate a kidney to her. Furthermore, the doctor also mentioned the feasibility of kidney transplantation, so the best friends tried to understand further about the procedure, the cost and other things about kidney transplantation. Although Kooi Hwa is willing to donate her kidney, the professional medical team still needs to reconfirm the donor's physical and psychological preparedness.

The kidney patient, Bee Lean, and the donor, Kooi Hwa, are ready for kidney transplantation. However, they had paid for the tests and examinations earlier of nearly RM20,000. They are unable to bear the cost of a kidney transplant of RM120,000. They have no choice but to approach One Hope Charity for help.

Bee Lean and Kooi Hwa jointly established a toy store in Kuantan. After two years of lockdown due to the pandemic, the toy store has barely survived until now. Currently, the two only receive RM2,000 each to cover their living expenses. Bee Lean also needs to support the costs of her elderly mother, so her life is stretched.

After reviewing the case, One Hope Charity decided to assist in raising RM120,000 for kidney transplantation. The family members agreed to fully authorise One Hope Charity to take charge of the fundraising and collect donations from the well-wishers on their behalf. For more information, contact the One Hope Charity hotline at  016-419 2192 or 019-232 2192