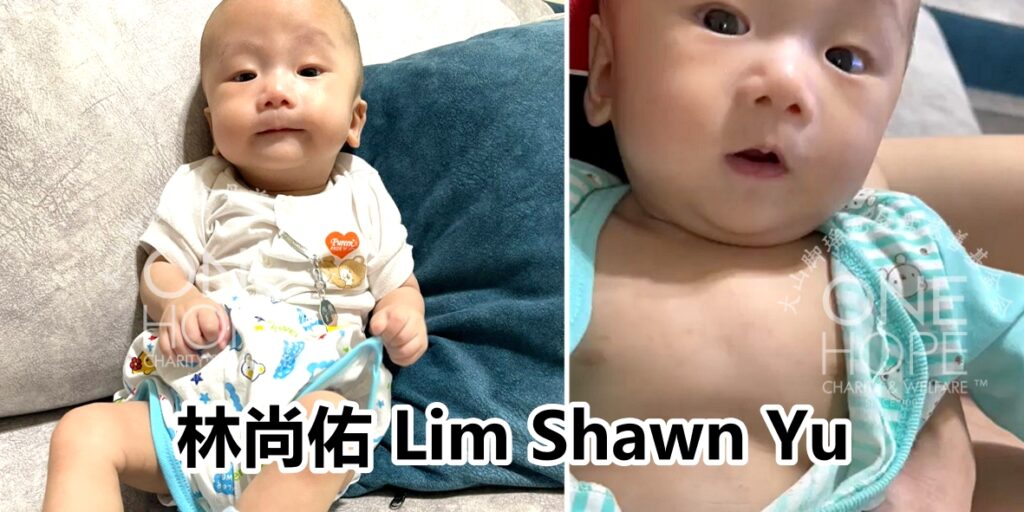 A baby boy was diagnosed with Tetralogy of Fallot (TOF) – a congenital heart disease at birth. In the past four months, he vomited almost every time he drank milk, and his development was slower than the other babies of his same age. He had a hole in the heart and pulmonary artery blockage. He needs an emergency surgery before his heart fails, but he is still short of RM50,000 to undergo the life-saving surgery.

Baby Lim Shawn Yu from Johor seems to be normal, but he suffers from shortness of breath when he is crying and drinking milk. His parents are afraid that he will be out of breath.

The baby needs a surgery before his heart fails, but the surgery cost RM80,000. His parents can only afford RM30,000, so they hope that the public can help them with the shortfall of RM50,000.

【The mother fell during pregnancy, but examination showed that she was alright. Unexpectedly, the baby was discovered to have heart murmur during a check at birth, and he needs to be sent to the hospital immediately when his lips and nails become cyanotic】

Everything was normal during the pregnancy and the mother also attended monthly check-ups. However, she accidentally fell and for the peace of mind, the mother went to a clinic for a check and there was no abnormality in the fetus. At the 36th week of pregnancy, her whole family was tested positive for Covid-19. After two weeks of quarantine, the mother was admitted to the hospital for a caesarean section.

The baby boy was born on 20 March and the doctor found that the baby boy had a heart murmur during a routine check. Detailed examination later confirmed that the baby boy suffered from Tetralogy of Fallot (TOF), include pulmonary stenosis, ventricular septal defect, overriding aorta and hypertrophy of the right ventricle. The baby boy has a hole in his heart, he only has three heart valves and he also suffers from pulmonary artery obstruction.

At that time, the doctor informed that the baby boy can only undergo a surgery when he is 8kg to 10kg, or when he is more than six months old. Earlier, he relied on the medicine to control his condition. The doctor also reminded the parents to send him immediately to the hospital if his lips and nails become cyanotic. Fortunately, his condition has not deteriorated.

Looking at their child suffering from shortness of breath, the parents are helpless and worried. The doctor has scheduled the earliest time for surgery, but the parents are unable to afford the huge surgical fee, hence they seek help from the public to save their child.

His 36-year-old father Lim Kai Xun provides air conditioning maintenance services, with a monthly income of RM3,500. His 29-year-old mother Yee Zhi Yun is responsible for the administrative work and receives a salary of RM2,000. The couple have another four-year-old daughter.

The parents have exhausted their savings and could only afford RM30,000. They are unable to pay for the remaining RM50,000, hence, they approached One Hope Charity for help. After reviewing the case, One Hope Charity decided to assist in raising the medical expenses. The family agreed to fully authorise One Hope Charity to take charge of the fundraising and collect the donations from the well-wishers on their behalf.