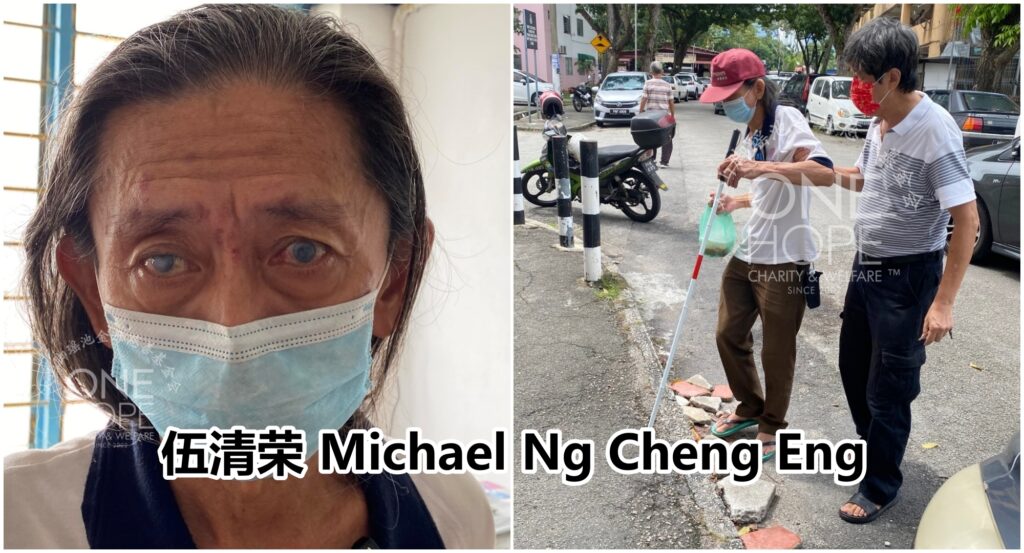 An electrical technician suffered from glaucoma five years ago and his vision was affected. Last year, his vision suddenly deteriorated and he was left with 3% vision in his right eye, and completely blind in the left eye. The doctor has determined that he is suitable for corneal transplantation. However, it cost about RM43,000 for him to regain his sight.

63-year-old unmarried man, Michael Ng Cheng Eng from Penang Island, was diagnosed with glaucoma in 2017, and he has been going for regular follow-up visits in the hospital since then. However, due to the outbreak of the Covid-19 pandemic, his eye examination appointment was postponed again and again. His vision has deteriorated from blurred to completely blindness and it has greatly affected his life.

Michael said that he used to be an electrical technician before he became blind, and he contracted some small electrical projects. However, after he became blind, his customers dared not continue to let him work, for fear that he would be accidentally electrocuted, so he lost his livelihood after losing his sight.

Over the years, he has relied on his savings and the help of his friends to support him financially. However, what he hopes most is to have a cornea transplant, and then return to work after regaining his sight.

As Michael was not born with visual impairment, he often fell while walking and injured himself after he lost his sight last year. He will also kept turning around on the same spot because he couldn’t see, which made his group of friends sad to see it.

On 22 November last year, a friend brought Michael to the hospital for examination and the report showed that his vision in his right eye was left 3%, while his left eye has completely blind. After a thorough examination, the doctor determined that his left eye was suitable for corneal transplantation. However, the transplantation and post-surgery nursing care cost RM43,000. His friend is unable to afford it, hence, he approached One Hope Charity for help.

“It is very frustrating when I can’t see. Sometimes, I would knock my head and got injured when I was just doing the simplest house chores such as hanging the clothes. When I go out, I might also trip over a rock and fall.”

After the home visit, One Hope Charity decided to assist Michael with his corneal transplant to help him regain his sight. Since Michael is living alone, he must be admitted to a nursing home for at least two months after the surgery. Hence, One Hope Charity will help him to raise RM43,000 for his surgical fee, nursing home expenses, anti-rejection drugs (if needed) and other expenses. Michael has two older brothers, both of whom are retired and are unable to pay for his surgery.