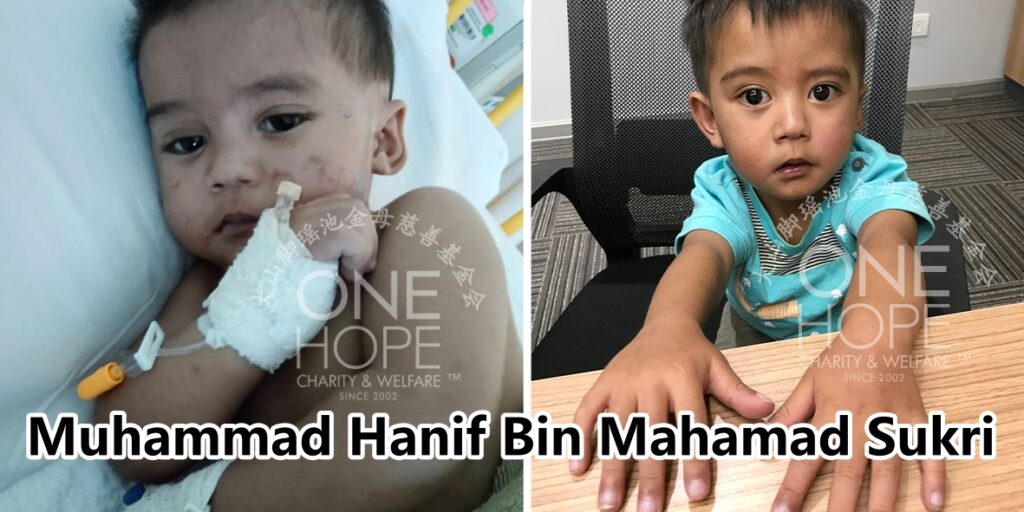 The two-year-old boy was diagnosed with severe heart disease shortly after he was born. However, the scheduled heart surgery forced to be delayed for two years due to hydrocephalus and hyperleukocytosis (high white blood cell count). And now, his brain condition and the white blood cell count are under control, but his heart condition deteriorated due to the deferment of his heart surgery, so he needs to undergo the surgery as soon as possible, but his parents are unable to afford the surgical fee amounting to RM120,000.

Malay boy Muhammad Hanif Bin Mahamad Sukri from Kedah, was diagnosed with severe heart disease at birth. At that time, his heart could not supply blood to the other parts of his body. The doctor implanted a stent for his heart and he spent over three months in the intensive care unit of a hospital. He has been relying on medication to stabilise his condition all this while.

Shortly after he was discharged, he was diagnosed with hydrocephalus and hyperleukocytosis by the doctor. He has been in and out of the hospital for the past two years, and his heart surgery was forced to be postponed due to his medical conditions.

Until recently, his hydrocephalus and hyperleukocytosis have been cured, but his heart condition deteriorated. He needs to undergo the long-delayed heart surgery as soon as possible to save life.

The cardiologist examined him once again after two years, and he was diagnosed with pulmonary atresia with intact ventricular septum (PAIVS) and ventricular septal defect (VSD). Besides repairing his heart, removal of the stent which was implanted two years ago also need to be done.

The boy's 46-year-old father Mahamad Sukri Bin Ibrahim is a gardener of a school, earning slightly over RM1,000 a month and his 46-year-old mother Salma Binti Che Man is a housewife. She also suffers from heart disease and needs to be on medication and regular monitoring of her condition. They still have another three children - the 11-year-old eldest son and a pair of 10-year-old twins.

After reviewing the case, One Hope Charity decided to help Muhammad Hanif to raise the surgical and medical expenses. His family agreed to authorise One Hope Charity to take charge of the fundraising and collect donations from the well-wishers on their behalf.