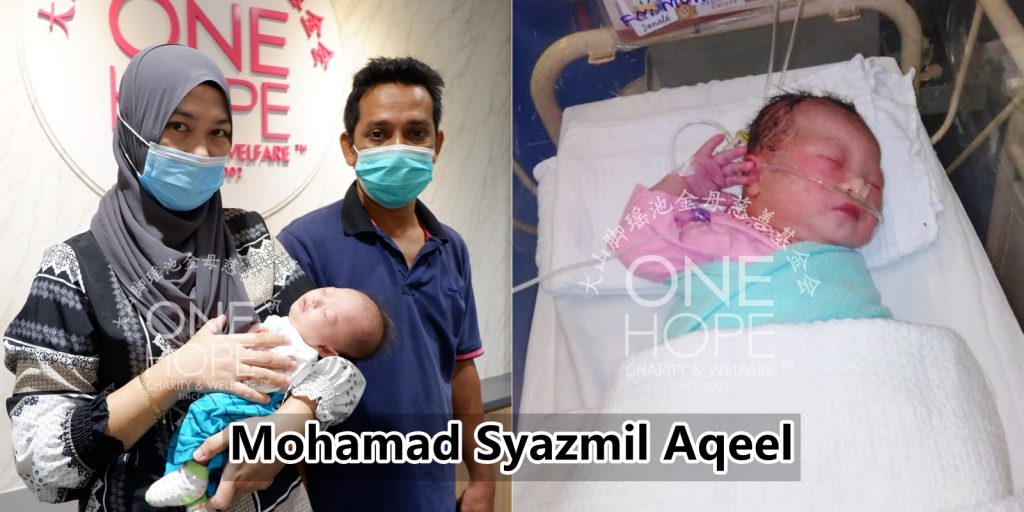 A two months old baby boy was unable to breathe and his face even turned purple whenever he drank milk due to the hole in his heart and malformation of his blood vessels. The boy is close to getting the most opportune time for his heart repair surgery, but the hefty fee of RM80,000 has left the parents at a loss, hence they hope the public could help save their poor baby’s life.

Mohamad Syazmil Aqeel was born on March 4 in Sungai Petani. When he was still in his mother’s womb, there were no signs of abnormalities. But once he was born, the doctor detected irregularities in his heart. Further examination confirmed that he has a hole in his little heart and malformation of his main blood vessels.

That time, the doctor immediately transferred him to the NICU ward for examination and treatment. The baby boy stayed in the NICU for four days before the doctor permitted his discharge, followed by a recommendation to a pediatric cardiologist.

During another medical checkup by the specialist doctor, it is found that the boy has a Type 2 atrioventricular septal defect and mitral valve insufficiency. He must undergo the heart repair surgery only when his body weight is at 3kg, otherwise his heart will gradually deteriorate. The heart surgery cost around RM80,000.

Right now, the boy weighs around 2.85kg, but due to his congenital heart disease, he has trouble breathing while drinking milk, hence losing the interest in drinking milk, which leads to the slow growth of his body weight.

The baby’s father Mohamad Nuzri bin Ibrahim, 46, is a former chef for the army but now collects RM1,768.72 monthly for his retirement. After he had left the army, he worked as a janitor for a school canteen, with a monthly income of RM50. However, due to the MCO, his income has been unstable.

The mother, Salasiah binti Omar, 40, is a housewife. The family also has three other children, aged 14, 11, and seven.