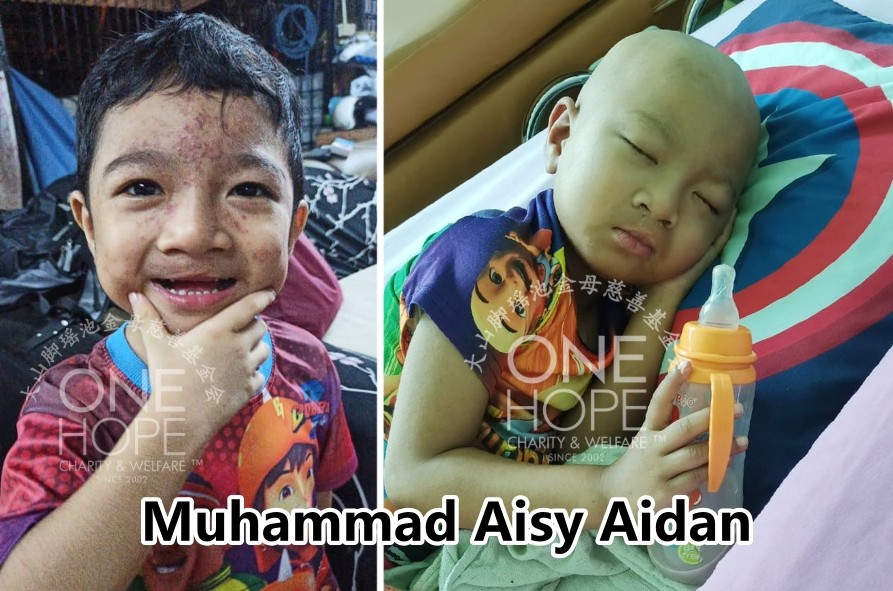 Thinking that those were just scars from mosquito bites, his family did not know that those were signs of a deadly and rare type of leukaemia. Four-year-old boy Muhammad Aisy Aidan bin Abdul Hamid was tested for Juvenile Myelomonocytic Leukaemia (JMML), a rare leukaemia that only happens one in every one million people. There are only three JMML patients in the whole of Malaysia.

Because of the love of a brother, his 13-year-old brother donated bone marrow twice to save him. His parents have finished all their savings on their son’s treatment, but now, the boy has cancer recurrence and urgently needs RM79,460 for medical expenses. His desperate parents begged for public assistance.

【The 13-year-old brother just entered secondary school. He might be indecisive sometimes because of fear and pain, but in order to save his brother’s life, he always made the brave decision. He had donated his bone marrow twice, hoping that it would help his brother】

The four-year-old boy was lively and lovely. He enjoyed three years of happy life, but in 2020 when he was four years old, his hands and feet started to show mosquito bite marks. He went for treatment but the doctor then only gave him medication for him to apply on the skin.

After applying the medicine for more than three months, his condition did not improve. The clinic referred him to the Selayang Hospital for examination. The blood test report showed that the patient had low blood platelet count, and he was referred to Kuala Lumpur General Hospital for bone marrow examination. The cancer index at that time was negative. The doctor suspected that he had systemic lupus erythematosus (SLE) and prescribed some medications.

In March 2021, the boy’s condition worsened. His blood test result showed that his blood platelets fell to 12, and he was admitted for blood transfusion. He was also referred to a blood specialist at the University of Malaya Medical Centre for further blood test. He was diagnosed with Juvenile Myelomonocytic Leukaemia (JMML).

The doctor said that this is a rare type of leukaemia with only one case per one million people, and Muhammad Aisy Aidan is the third patient having this disease in the hospital. This rare leukaemia cannot be treated with chemotherapy, and the only treatment is through bone marrow transplantation.

Fortunately, the bone marrow of his 13-year-old brother was suitable for him. The elder brother undergone the bone marrow transplant surgery in August, and after two months of observation, he was discharged from the hospital in October. At that time, the RM50,000 transplantation cost, anti-rejection medications after the surgery and other expenses were paid through the parents’ Employee Provident Fund (EPF), hospital’s welfare bureau, and some money that the family borrowed from their relatives and friends.

While waiting for the bone marrow transplant surgery to be scheduled, the child must return to the hospital every week for platelet transfusion to avoid sudden internal bleeding, and each admission to the hospital is a heavy financial burden for the parents.

His 45-year-old father Abdul Hamid bin Arshad is an odd job worker who does grass cutting and cleaning jobs, earning about RM1,500 to RM2,000 a month. His 41-year-old mother Azean Binti Abdul Aziz is a clerk in a legal firm with a salary of about RM2,500. However, since her son became ill, and due to the Movement Control Order at the beginning of this year, she was forced to work from home. After that, she was unable to return to her workplace and she continues to work from home. With that, her salary was reduced to the current RM500.

The couple has five children aged 18, 17, 13, eight and four. Their four elder children are still schooling, and their youngest son always admitted to the hospital due to his health condition.

After reviewing the case, One Hope Charity decided to assist him in raising the RM79,460 medical expenses. The family agreed to authorise One Hope Charity to take charge of the fundraising and collect donations from the well-wishers on their behalf.