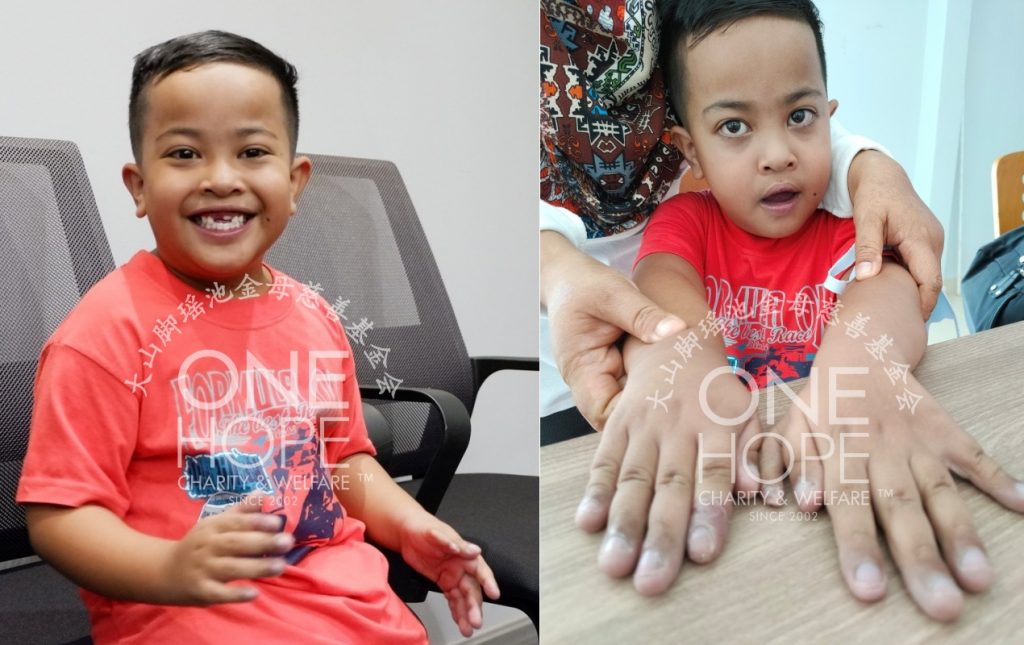 A young and optimistic boy was diagnosed with a severe heart disease, and the doctor had identified his condition as requiring 3 separate operations. While the boy has learning disabilities, he has a strong spirit and a strong will to live. He already underwent surgeries after birth and at the age of 4 respectively. Now, he will be going for his third heart surgery. The family hoped that the public could donate RM80,000 for his surgery fee, in hopes to save the life of their bright and optimistic child.

He needs to undergo surgery as soon as possible in order to save his life. The mother has been taking extra care of her son, in hopes that his son would soon be free from his illness.

【Any form of movement will leave him heaving for air. The lack of oxygen in his body may soon need to rely on an oxygen tube】

When he was still in his mother’s womb, everything was normal until they noticed lack of movement in the womb, which led to an immediate C-section. When delivered, the whole baby was blue in colour, showing signs of severe hypoxia. He was taken to the ICU for treatment and examination. Two weeks after birth, the boy was transferred to Penang General Hospital for heart stent implantation.

When Muhammad Darwisy Dasuki is at the age of 4, he could not walk at all and had to rely on his knees to crawl. He can only drink milk while using a breathing tube when staying at home. If he ever made any aggressive movement, he would have trouble breathing. Additionally, his body was very weak and frequently got sick, to the point that going in and out of hospitals became a norm to him.

With the recent medical checkup, he was informed that he must undergo his third heart repair surgery as soon as possible, yet the fee was up to RM80,000.

The father Mohd Wazir bin Mat, 40, is a truck driver with a monthly income of RM1,860. The mother Zarimah binti Saidin, 38, is a housewife. They have a total of two kids, aged 12 and 8 respectively. The family was unable to bear their child’s medical fee, hence they approached One Hope Charity for help.