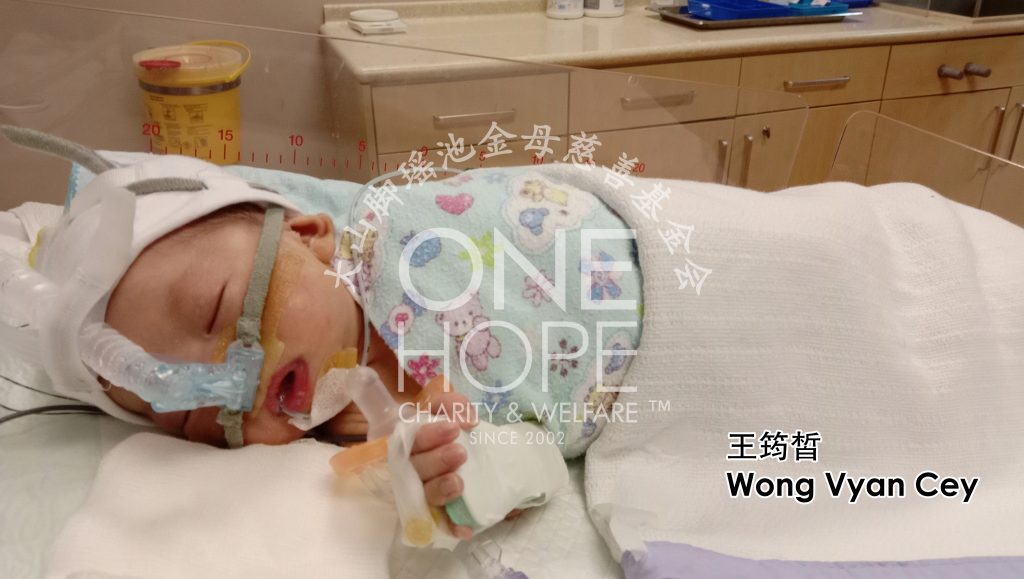 A young baby needs your help to save her life!

Wong Vyan Cey from Kuala Lumpur suffered from breathing difficulties two hours after birth. Although the doctor had performed emergency treatment and managed to save her life, it was found that she was diagnosed with a severe congenital heart disease six days later. She needs RM85,000 for her heart repair surgery, and the family hoped that the public could save her life.

Little Wong was born on April 5 and at that time, the mother Lau Siow Ee, 34, did not get a chance to hold her child as the nurses immediately took her to the nursery. What was unexpected was that two hours later, she suddenly had breathing difficulties and doctors immediately provided emergency treatment and took her to the ICU ward.

The doctor provided her with medication and oxygen, but six days later her condition has yet to change. After examination, it is found that her severed heart was the root of the cause. Based on the serious condition, the doctors recommend the parents that their child must undergo surgery soon as possible.

After examination, the baby girl suffered from Total anomalous pulmonary venous return (TAPVR), which is considered to be a severe congenital heart disease. She must undergo surgery immediately or else her life would be in danger.

The baby girl’s surgery costs a hefty amount of fee, but the family and friends are only able to bear RM60,000. They are still short of RM85,000 and hoped that through One Hope Charity, they would be able to reach out to the public and hoped to give a second chance in life for their daughter.

The father Wong Huey Yii, 39, is a property agent, with a monthly basic salary of around RM2,000, and his income is based on the houses he sold. The mother Lau Siow Ee, 34, works in a bank with a monthly income of RM6,000. They also have another five-year-old son