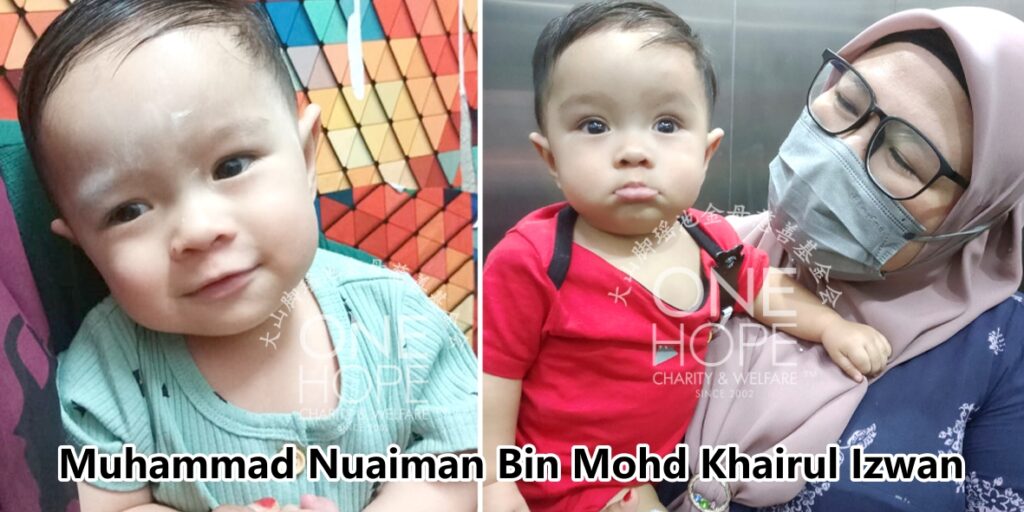 A couple have been married for four years and they looked forward to the arrival of their child. Everything seemed to be normal from the pregnancy to delivery. However, the pregnant mother suffered from gestational diabetes and needed to be monitored regularly. At 37 weeks of pregnancy, the baby in the mother’s womb faced the threat of stop developing, in addition, the baby was in breech position, so the doctor decided to perform an emergency caesarean section. The baby was born with cyanosis and he was rushed to the intensive care unit. Examination confirmed that the baby suffered from severe congenital heart disease.

Baby Muhammad Nuaiman Bin Mohd Khairul Izwan from Nibong Tebah in Penang, can only undergo the surgery when he is nine months old, or weighs more than 8kg, so he has been on regular follow-up visits and relies on medication to control his condition. And now, it is the suitable time for him to undergo the surgery, but his parents are unable to afford the huge surgical fee. They can only afford RM1,000, and can’t do anything with the shortfall of RM74,000, so they approached One Hope Charity for help.

【The child will have risk of dizziness and fainting due to hypoxia when he cries, so the parents have been taking care of him carefully for the past ten months】

Therefore, the parents have been taking care of him very carefully for the past 10 months. However, he went to see a doctor when he was seven months old due to cough and phlegm, and it was discovered that the bacterial infection had affected his heart. His lips, fingernails and toes became cyanotic, and the blood oxygen reduced drastically. At that time, Seberang Hospital referred him to Penang Hospital for treatment, and the dose of his medication was also increased.

And now, the child is already 10 months old and weighs 7.2kg, so it is a suitable time for him to undergo the surgery. His parents seek help from One Hope Charity.

His 33-year-old father Mohd Khairul Izwan Bin Mat Riffin and 30-year-old mother Nor Hidayah Bt Mehat worked as operators before, but the mother later quitted her job and became a hawker selling laksa and noodles. She could earn about RM100 a day before the pandemic. The father also resigned later to help his wife in operating the hawker stall. However, their business was greatly affected by the pandemic, and now, they will get about RM2,000 sales a month. After deducting the cost, they left about RM1,000, which will be used as their living expenses. So, they can only afford RM1,000, and they are unable to pay for the remaining medical expenses.

After reviewing the case following a home visit, One Hope Charity decided to assist in raising the shortfall of RM74,000 in medical expenses. The family agreed to fully authorise One Hope Charity to take charge of the fundraising and collect the donations from the well-wishers on their behalf.