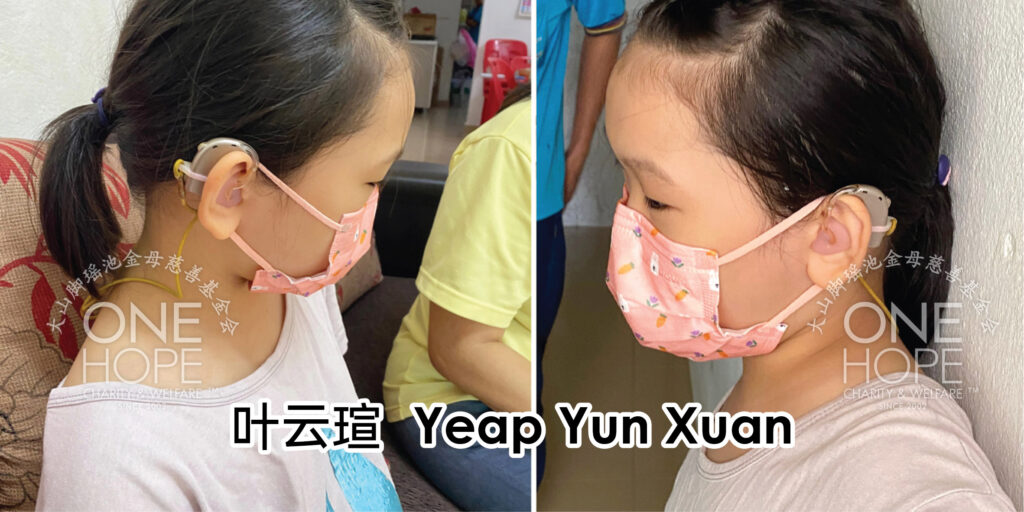 The little girl suffers from bilateral hearing loss. She only managed to called her father and mother once at the age of three, and she has not speak again since then. In the past four years, her parents have given her the best education and company, and they only hoped that she would speak again, but the mother unfortunately died of Covid-19 last year, and she has no chance to hear her calling “mom” again.

Seven-year-old girl Yeap Yun Xuan from Nibong Tebal in Penang, was diagnosed with bilateral hearing loss when she was two years old. She started to wear hearing aids in both ears, but her hearing is getting weaker and weaker, and the hearing aids are no longer helping. The doctor conducted a series of tests for her, and it was determined that she is suitable for cochlear implants in both ears. Her single father can only afford RM30,000 and they are still short of RM128,000, hoping that the public can help them with the amount.

When Yun Xuan was two years old, her parents discovered that she could not speak. They brought her to the hospital and the doctor diagnosed her with hard-of-hearing. She has always been well taken care of by her parents. Although she has disability but she is still the only child and the dearest daughter in the eyes of her parents.

Her mother died of Covid-19 in July last year. After a few months of bereavement, her father decided to come out of his grief and face his daughter’s hearing impairment problem, so he actively asked for help, hoping that his daughter could gain back her hearing ability.

【The girl is in Year One, and the school teacher informed that if her hearing does not improve, she will need to be transferred to a special school for the deaf to learn sign language】

Yun Xuan’s parents discovered that she could not call “dad’ and “mom” when she was two years old, so they brought her to the hospital to seek medical help. The doctor then suggested her wearing hearing aids in both her ears. When she was three years old, she called “dad” and “mom” for the first time, and her parents were so excited. Unexpectedly, she was reluctant to speak again since then.

In kindergarten, her teachers told the parents that sometimes Yun Xuan would react but sometimes she wouldn’t respond when they tried to talk to her, and they suggested the parents to bring her for a check. During a hearing assessment follow-up, the doctor claimed that Yun Xuan was not concentrating and failed to conduct a hearing test on her.

However, Yun Xuan could call “grandpa” and “grandma” when she was five years old. When she started Year One in primary school at the age of seven, the teachers said that they must go very close to speak with Yun Xuan, otherwise she would not hear. Therefore, they asked the parents to bring her for treatment again, or she will have to be referred to a special school for the deaf to learn sign language when she entered Year Two next year.

At the suggestion of relatives and friends, her father took Yun Xuan to a specialist hospital. After examination, it was confirmed that her hearing in both ears was weakened, and the hearing aids were no longer helping. She needed cochlear implant in both her ears that cost RM158,000, but the single father can only afford RM30,000.

His 40-year-old father Yeap Chun Haur is a worker at an auto repair body shop, with a salary of RM2,200. Her mother was a clerk but she died of Covid-19 in July last year at the age of 37. The social security organisation (Socso) provides a monthly aid of RM1,500 to the family.

Yun Xuan, who had been very closed to her mother in the past, suddenly lost her mother. She was panicked and now, she started to “attach” to the father so that she feels secure. The father is now playing the role of a father and a mother, and the father-and-daughter are depending on each other. The father wants to take care of his daughter by himself, so he personally send and fetch Yun Xuan from school, as well as to prepare her meals and do the housework.

After reviewing the case, One Hope Charity decided to help Yun Xuan in raising RM128,000 for the cochlear implant surgery in both ears. Her family agreed to fully authorise One Hope Charity to take charge of the fundraising and collect the donations from the well-wishers on their behalf.