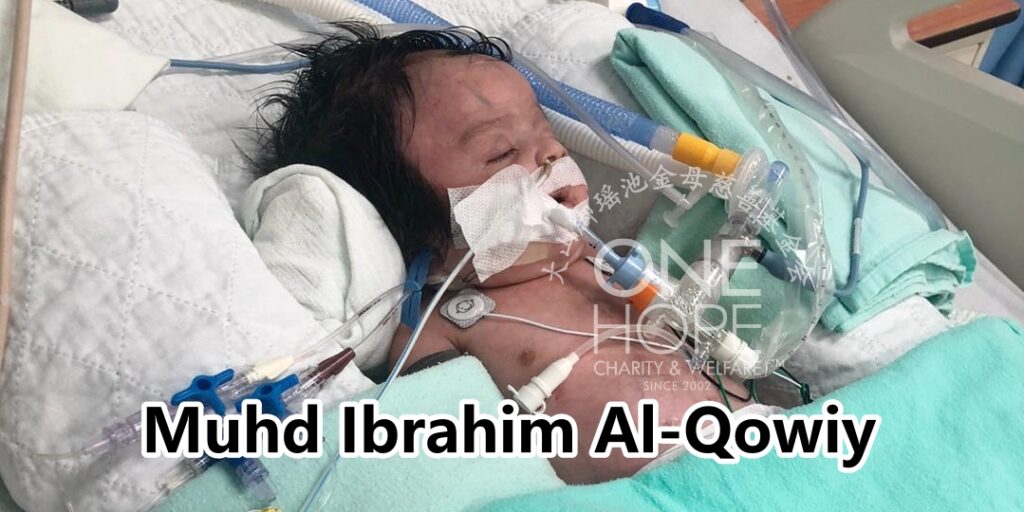 *This case will channel RM10,000 from the "Emergency Medical Reserve Fund". Hence, One Hope Charity will only launch fundraising of RM80,000 for this case.*

It is an emergency case. A two-month-old baby boy with severe congenital heart disease has resilient life. He can't breathe on his own after three surgeries, but he is still fighting hard to survive. Now, his parents eagerly seek public donations for a fourth life-saving surgery.

Muhd Ibrahim Al-Qowiy Bin Muhd Jannatul Firdaus is a baby boy from Kedah. His doctor tried to get him off the breathing aid after an earlier surgery so that he could try breathing on his own, but it could only last for three hours. After that, he experienced breathing difficulty and cyanosis, so the doctor provided him with oxygen immediately. An examination later showed that his cardiovascular system could not supply oxygen to his heart, so he needed another urgent surgery that cost.

Since the day the mother was pregnant with the baby boy, he seemed to be healthy, and the baby boy was born in Alor Setar Hospital on 25 October, weighing 3.6kg. Unexpectedly, on the third day after birth, the doctor discovered that the baby boy had a murmur in his heartbeat, so the doctor referred the baby for a detailed examination. The baby boy was diagnosed with coarctation of the aorta (CoA) and isthmus hypoplasia, patent ductus arteriosus (PDA), atrial septal defect (ASD) and partial anomalous pulmonary venous drainage (PAPVD).

The baby boy had undergone a five-and-a-half-hour surgery on 24 November, and the second surgery was on 28 November with a duration of five hours. However, the doctor found the diaphragm was loose a few days after he was in the intensive care unit. Therefore, he had his third surgery on 2 December.

Although he is only two-month-old, he has undergone three surgeries. The doctor referred him to Penang Hospital for further treatment and observation. During this period, the baby had a bacterial infection in his lungs and relied on a breathing aid. He could only breathe on his own for three hours after removing the oxygen supply. The doctor discovered that the oxygen could not deliver to his heart and determined it was a cardiovascular problem. Therefore, he needed a fourth surgery; otherwise, his life may be at risk.

The parents have been travelling around for the past one and a half months due to their child's condition. They stay in Penang from Monday to Thursday and return to Kedah to care for their son from Friday to Sunday. The parents stayed overnight in the hospital lobby and in the car during the baby's surgery. After the baby was transferred to the government hospital, the hospital arranged for the couple to sleep in the patient's family dormitory.

The parents were exhausted and had to bear the transportation and other expenses, so they could not afford the surgical fee. So, they are hoping for public help.

His 27-year-old father, Muhammad Jannatul Firdaus Bin Noor Azlan, is a student pursuing his bachelor's degree. He works part-time as a graphic designer and photographer, earning about RM1,500 a month. His 31-year-old wife, Hani Nabilah Bt Sukarno, is a housewife. The couple has four children, aged six, four, three and the two-year-old boy.

After reviewing the case, One Hope Charity decided to assist in raising for the boy's medical expenses. His family agreed to fully authorise One Hope Charity to take charge of the fundraising and collect donations from the well-wishers on their behalf.