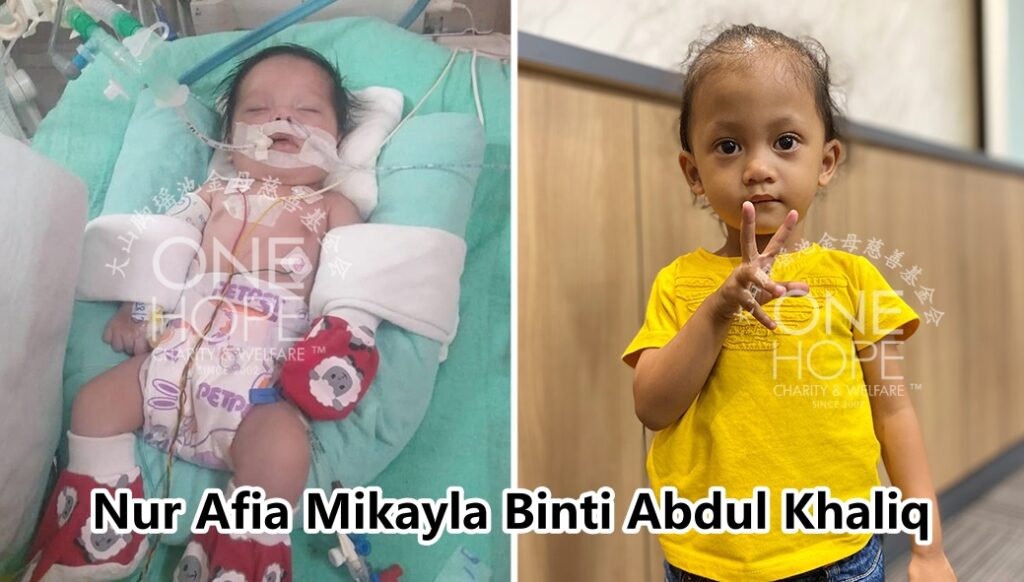 She is a gentle, shy and quiet two-year-old girl. It is hard to tell that she is suffering from serious illness. Not known to many, the little girl had undergone three heart repair surgeries at a young age. As she grows older, she needs another surgery now and her parents are begging the public to donate RM90,000 so that their daughter can undergo the life-saving surgery.

Two-year-and-nine-month-old Nur Afia Mikayla Binti Abdul Khaliq from Penaga in Penang is a gentle, shy and quiet girl. She has a pair of big round eyes and curly hair, and looks like a doll. However, she suffers from congenital heart disease since she was born.

The girl was not detected with any abnormalities throughout her mother’s pregnancy. However, the doctor discovered that her oxygen level dropped drastically three hours after she was born, and she was rushed to the intensive care unit. After examinations, the results revealed that she suffered from rare heart disease, such as mesocardia, cardiovascular stenosis, blood vessels reversal and other heart problems. She had undergone three surgeries since birth.

And now, she needs to undergo another surgery that cost RM90,000. Her young parents are worried about the huge amount of surgical fee. They beg the public to help them so that the child can continue survive.

【Suffering from rare heart disease, the girl had undergone three surgeries in stages】

The girl suffers from rare mesocardia and pulmonary atresia with ventricular septal defect (PA-VSD). She stayed in the hospital for two months after birth, and she was allowed to be discharged after completing two surgeries. In 2020, she was referred to a specialist hospital for surgery after a regular follow-up visit. She was one year old then.

In November this year, during a regular follow-up visit, the doctor told her parents that the girl needed another heart repair surgery that cost RM90,000 as the surgery this time will be more complicated.

The girl has not had any symptoms since she was born, nor will she suffer from shortness of breath, however, her fingers and lips will occasionally become cyanotic.

The girl’s 24-year-old father Muhd Hanif bin Montar is a deliveryman with a basic salary of RM1,250. Her 21-year-old mother Aizatul Melissa bt Abdullah is a housewife since she graduated from secondary school.

She went for regular follow-up visits for more than two years and each visit cost a few hundred ringgit. She also needs more expenses for her follow-up visits in the future. Therefore, the parents cannot afford her surgical fee, hence they approached One Hope Charity for help.

After reviewing the case, One Hope Charity decided to help the girl in raising the RM90,000 surgical fee. Her family agreed to authorise One Hope Charity to take charge of the fundraising and collect donations from the well-wishers on their behalf.