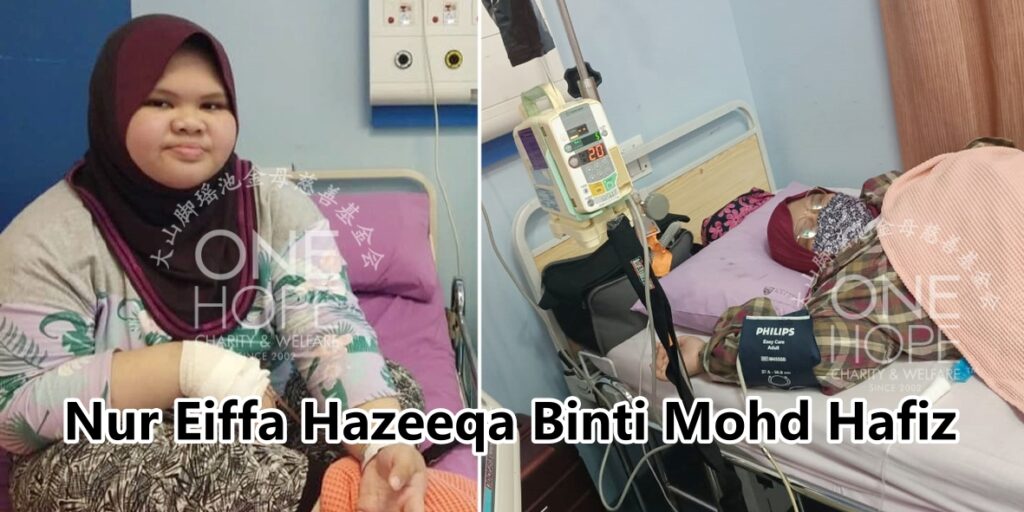 She is just 17 years old but she suffers from several diseases. She was diagnosed with congenital heart disease and bronchiolitis obliterans at birth, and later suffered from Crohn’s disease at the age of 11. For the past six years, the parents had exhausted their savings on her medical treatments. And now, they have no choice but to beg the public to help their child with a year’s medical expenses amounting to RM45,120, so that their daughter can continue with her treatments.

17-year-old Nur Eiffa Hazeeqa Binti Mohd Hafiz from Shah Alam in Selangor suffers from various diseases. She has been in and out of the hospital more than her school, but she remains jovial. She has been actively accepting her treatments, and now, she hopes that the public can help her, so that she can continue with the treatments and return to the school.

【She suffers from bronchiolitis obliterans and needs to take steroid in long term. The side effects of the steroid resulted her weight to hike to 80kg, but her inflammatory bowel disease which causes her to lose 20kg】

Nur Eiffa Hazeeqa was diagnosed with congenital heart disease, namely atrial septal defect (ASD) and patent ductus arteriosus (PDA) since she was born. She had undergone a heart surgery at the age of nine months old to repair one of the holes, and the other one is still under observation, so she goes for regular follow-up at the National Heart Institute.

She went to Kuala Lumpur Hospital for follow up due to bronchiolitis obliterans at the age of seven. She needs to use a continuous positive airway pressure (CPAP) machine every night. The girl had been taking steroid in the past, and the side effects resulted her weight to hike to 80kg.

When she was 11 years old, she had blood in the stool. At that time, her mother thought that it was due to menstrual. She later suffered from long-term abdominal pain and diarrhoea. She suffered from diarrhoea almost every hour, and she lost 20kg. After seeking medical treatment, she was diagnosed with Crohn’s disease, which resulted her to have pain in the joints of her hands and feet, and she was weak. As her veins are too small,  it was hard for the doctor to provide injection through her veins. So the doctor created a stoma in her neck for injection, so that she can use medicine to control her condition.

In May 2020, her condition relapsed and the doctor suggested her to change to another medicine, but the medicine cost RM7,520 a month. As her past treatments had exhausted the savings of her parents, they are unable to afford the treatment expenses this time. So the parents hope the public can assist their daughter.

Her 44-year-old father Mohd Hafiz bin Hashim is a graphic designer earning RM3,500 a month. Her 40-year-old mother Sharifah Nur Aminah bt Syed Abd Hamid ran a children’s clothing store earlier but the business ended during the Movement Control Order. In addition, her daughter needs to receive treatments in the hospital very often, so she sells cakes and some cooked food online, earning about RM1,000 a month. The couple have four children, aged between three and 17.

After a home visit, One Hope Charity decided to assist Nur Eiffa Hazeeqa bt Mohd Hafiz in raising the cost of the medicine for a year.