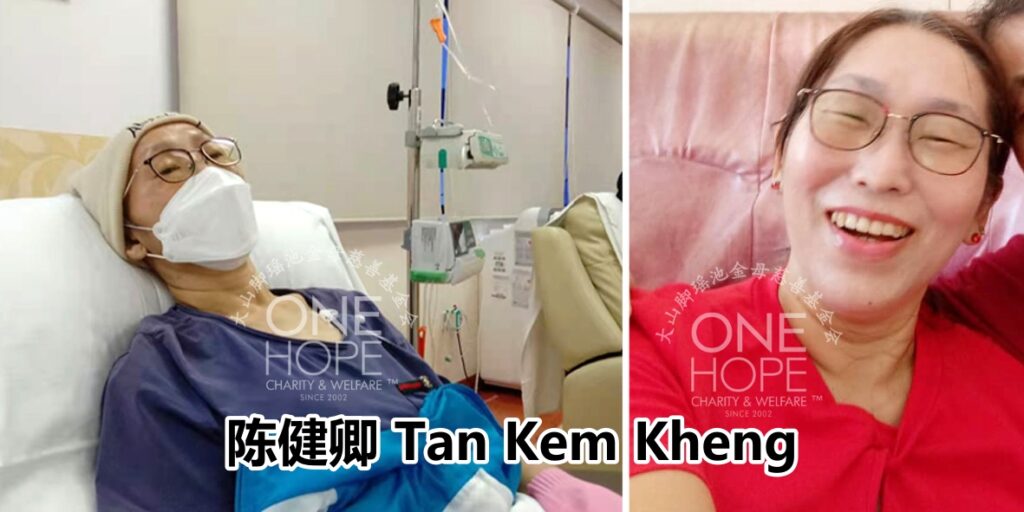 A cheerful mother was suddenly diagnosed with breast cancer. She must undergo mastectomy after eight sessions of chemotherapy, but the chemotherapy sessions had exhausted all her savings. She hopes that the public can help her with RM50,000 in medical expenses.

52-year-old woman Tan Kem Kheng discovered there were small bumps in her nipples about 10 years ago. At that time, she went to the doctor and was told that she was fine. She has been alright all along until about half a year ago, her nipples began to ooze pus. She thought it was just a sore and she just applied some medicines then. Unexpectedly, the wound became bigger and bigger, and her breast also started to swell.

In November last year, she began to feel unbearable pain in her breast, and she went to the hospital for medical treatment. The examination results revealed that she had stage III breast cancer and needed eight sessions of chemotherapy to shrink the tumour before getting a mastectomy.

However, she has exhausted her savings on the chemotherapy, but she still needs to undergo mastectomy and then radiotherapy sessions. She wants to fight against cancer, so she hopes that the public can help her with RM50,000 in surgical fee.

【Due to ignorance and feeling ashamed to let her friends and relatives know about her condition, Tan Kem Kheng silently endured the pain caused by breast cancer】

After 52-year-old woman Tan Kem Kheng who moved to Nibong Tebal in Penang from Tanjung Piandang in Perak, was diagnosed with cancer, she started to receive treatment actively, and she even finished up her savings for ther eight sessions of chemotherapy.

The tumour, which was originally the size of a palm, has shrunk to the size of a fist after the chemotherapy. The doctor suggested her to undergo mastectomy before starting her radiotherapy. Kem Kheng has very strong willpower, and she is also very optimistic in fighting against cancer.

Her 51-year-old husband Eng Chan Kong is running a small business. He earns about RM4,000 a month after deducting all the expenses. She has been helping her husband until the day when fell ill. Their 20-year-old daughter originally wanted to undergo teacher’s training, but she temporarily put aside her dream after her mother fell ill, so that she can take care of her mother, and at the same time, assist her father’s business. She has a monthly salary of about RM1,800.

Although the chemotherapy costs were mostly covered by the insurance, but Kem Kheng needs to change her diet, as well as to take supplement and health care products after experiencing the side effects of the chemotherapy. She spent about RM1,200 on this, and the family is unable to afford the surgical fee, hence, they approached One Hope Charity for help.

After reviewing the case, One Hope Charity decided to assist Tan Kem Kheng in raising the necessary medical expenses. Her family agreed to fully authorise One Hope Charity to take charge of the fundraising and collect the donations from the public on their behalf.