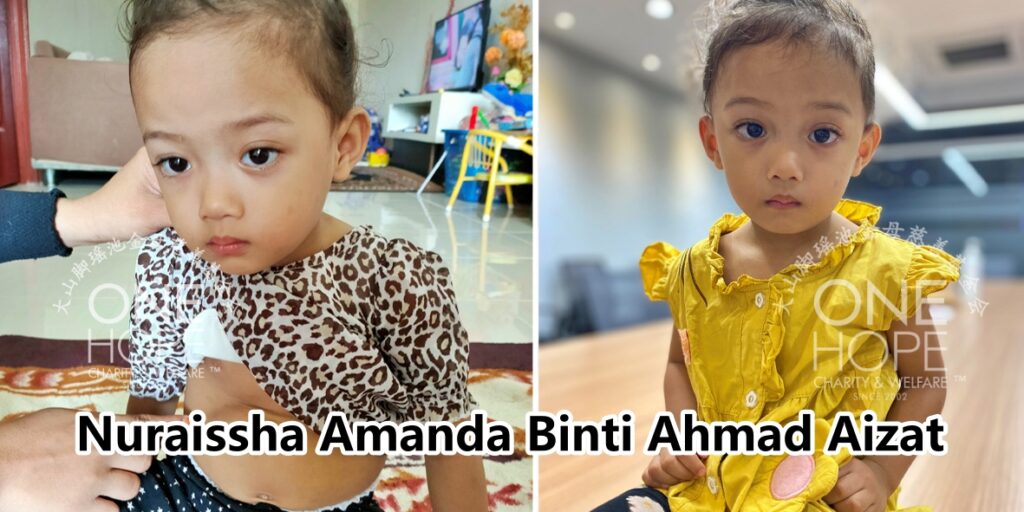 She was a premature baby born at seven months. She weighed only 1.4kg at that time. After the examination, she was found out to have a heart problem, but she needed to undergo monitoring for at least two years. At a recent follow-up visit, the doctor confirmed that her heart had swollen and showed sign of failing, so she needs an emergency heart repair surgery.

Nuraissha Amanda Binti Ahmad Aizat from Kubang Semang in Central Seberang Prai was born in September 2019. As she was a premature baby, she was sent to the incubator for special treatment as soon as she was born.

At that time, the doctor informed that the baby’s internal organs were well developed, but there was an opening at the valve of her heart. The doctor said she needed to be observed for at least two years, and perhaps the heart disease could heal on its own.

However, in January this year, the doctor discovered that her heart condition has deteriorated. Her heart swelled to twice its size and began to fail. It had reached the stage where surgery was required. However, the surgery is cost at RM70,000, but her single mother could only afford RM5,000. She begged all the generous individuals to help her with the shortfall of RM65,000 to save her child’s life.

【When the little girl learned that she needed a surgery, she was sad. She cried silently beside the volunteers during the home visit】

In January this year, Nuraissha Amanda suffered from loss of appetite and often cried for no reason. Her mother was very worried, hence, she brought her for a check-up. She then found out that her daughter’s heart had swelled twice its size and needed a surgery.

A paediatric cardiologist diagnosed Nuraissha Amanda with ventricular septal defect (VSD), and her heart has begun to fail. She must undergo a surgery as soon as possible. The surgery is cost at RM70,000, but her mother can only afford RM5,000.

During a home visit, One Hope Charity’s team found that the girl often frowned. It might be due to the heart problem that made her uncomfortable. She also seemed to know that she is ill. When the adults talked about the surgery, she did not throw a tantrum but just stayed aside and cried silently.

Her mother said that the child is not very active, but also not showing any other obvious symptoms, but her weight gain was slow. The average children of her age weigh about 15kg, but her daughter was only 9kg.

Her 29-year-old mother Nor Ain Binti Mohamed Yusof is currently in the process of divorce from her husband, and the daughter will be put under her custody. Earlier, she ran a business of selling clothes online with her sisters, but the sales were badly affected due to the Movement Control Order. As the business was greatly affected since November last year, she went out to get a job. Currently, she is a cashier at a petrol station, earning more than RM1,000 a month. Her hopes that One Hop Charity can assist in her daughter’s surgical expenses.

After the home visit, One Hope Charity decided to help Nuraissha Amanda in raising RM65,000 for her surgery. Her family agreed to authorise One Hope Charity to take charge of the fundraising and collect donations from the well-wishers on their behalf.