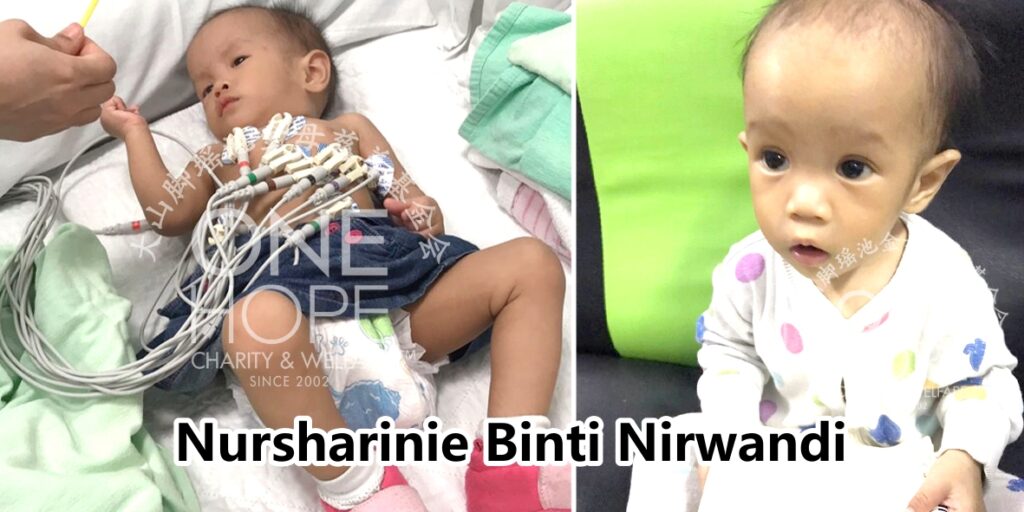 One week after her daughter was born, she was diagnosed with congenital heart disease. At that time, she could not operate due to her condition not being suitable. Over the past year, the girl grew up safely under the care of her parents. Now she has reached a proper weight for surgery. Seeking a doctor in West Malaysia, the parents only hope to extend their daughter's life.

Nursharinie Bt Nirwandi, from Lahad Datu, Sabah, was born in March last year. She seemed healthy at the time. Unexpectedly, she developed breathing difficulties a week later. Her parents took her to the hospital for checking. Nursharinie has the Double outlet right ventricle (DORV) and Ventricular Septal Defect (VSD).

The parents are worried and surprised because the three children born before were all healthy, and she did not expect the younger daughter to suffer from this disease. Because the daughter was still young, the doctor temporarily controlled the condition with medication, but frankly, the daughter's heart disease problem required surgery to continue her life.

In November last year, to treat their young daughter, their parents borrowed money from their relatives and friends and even pawned things at home to raise enough money to buy airline tickets. And the whole family left their hometown and moved to West Malaysia.

Now Nursharinie has reached the standard weight and can undergo heart disease surgery. The operation cost is RM80,000, and other institutions subsidize RM25,000. But it is still a shortfall of RM55,000. Nursharinie, now one-year-old, has cyanotic lips when she cries, leading to hypoxia and cardiac arrest if surgery is not done in time.

To give their daughter a chance to continue living, Nursharinie's parents asked ONE HOPE CHARITY for help, hoping that the public could help her daughter. After receiving the application, ONE HOPE CHARITY also arranged a home visit and decided to help Nursharinie raise the required RM 55,000 surgery fee.