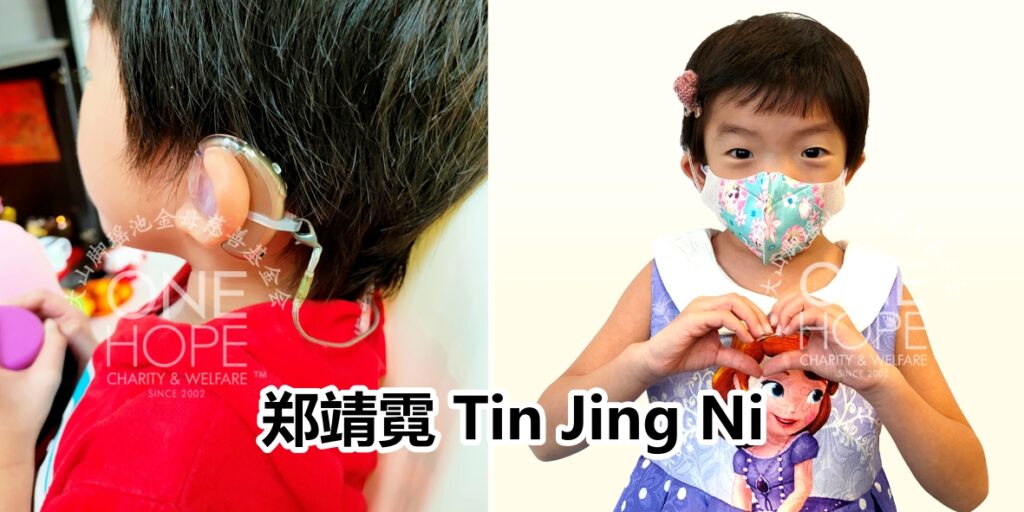 A six-year-old girl suffered from hard-of-hearing in her both ears since young. She has a cochlear implanted in her right ear, and now, the doctor determined that it is the time for another surgery to implant a cochlear in her left ear with only 20% hearing ability left. The parents hope that the public can help them with the shortfall of RM53,000 in cochlear implantation so that their daughter can gain her hearing before entering primary school.

Six-year-old Tin Jing Ni from Kuala Lumpur, was complained by her childcare teacher that she was a child who “couldn’t sit still” when she was two years old. However, it was because she was unable to hear the teacher’s instruction due to her hearing problem, so she often walked around during class.

Every time when her teacher started the storytelling session, other children would sit and listen to the teacher quietly. However, little Jing Ni would walk to the side and started to play with toys. Even if the stories were interesting, little Jing Ni remained “uninterested”.

At that time, the teacher suggested her parents to bring her to the hospital for examination, and it was found that she was born deaf with no hearing ability in her right ear, and only 20% of hearing ability in the left ear. She could only hear a little of the sound of aircraft engines.

When Jing Ni was slightly over three years old, she had a cochlear implanted in the right ear, and she started wearing a hearing aid in her left ear. After she could hear some sound, she gradually became more cheerful.

Jing Ni is a child who loves to socialise. Although her pronunciation is different and the other children may not understand what she is trying to express, but this does not stop her from playing with other children.

As Jing Ni could only start to hear when she was nearly four, her learning progress was much slower than her peers, and she also had some hard time catching up with her studies.

“And now, the doctor recommends that she can undergo another cochlear implantation in the other side of her ears to make her hear better. We hope that everyone can help little Jing Ni so that she can gain her hearing and catch up with her studies when she enters primary school.”

His 39-year-old father Joseph Tin and 38-year-old mother Bobo Lee work as property agent, with a total monthly income of over RM7,000. Apart from Jing Ni, they still have to take care of their elderly mother who suffers from depression. The couple can only afford RM7,000, hence they approached One Hope Charity, hoping to receive donations from the public.

Jing Ni will start her Year One next year, so this is the best time for her cochlear implant as she needs some time to get used to it, hoping that the cochlear implant will be able to function at its optimum when she enters primary school.

After reviewing the case following a home visit, One Hope Charity decided to assist little Jing Ni in raising the shortfall of RM53,000 for her cochlear implant, so that she can seize the opportunity to undergo the surgery and gain her hearing to catch up on her education.