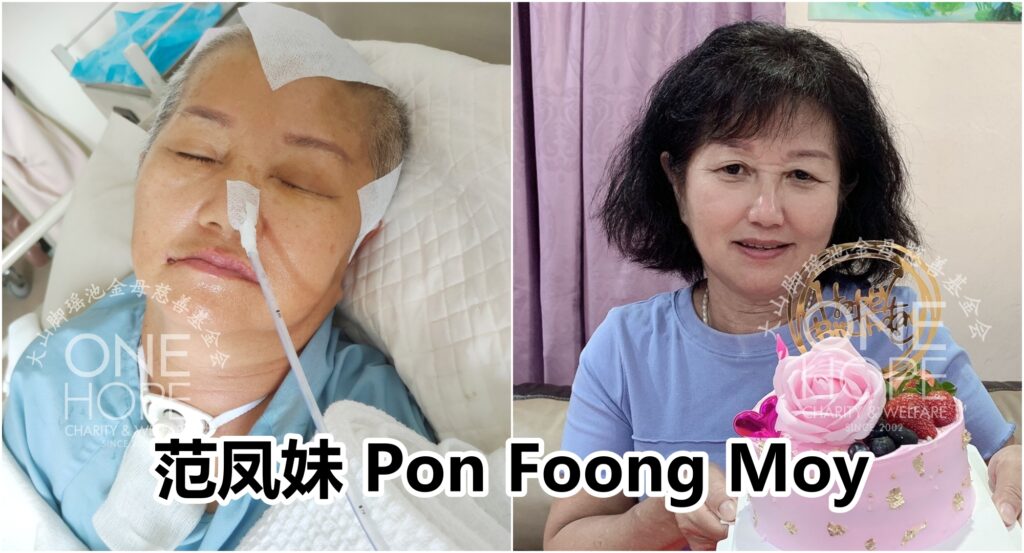 61-year-old Pon Foong Moy is a typical housewife. She raised her children and took care of her husband and family. After they grew up, the children wanted her to enjoy life, but she suffered a stroke due to rupture of a middle cerebral artery (MCA) aneurysm. The severity is such that only two out of 100 stroke patients suffer this condition.

Pon Foong Moy from Bedong in Kedah has exhausted her insurance claims and her children’s savings to pay for her huge medical expenses. After more than a month, they are unable to bear it anymore. They had paid RM183,000 but they still short of tens of thousands ringgit to pay for her medical expenses, hence they approached One Hope Charity for help. After reviewing the case, One Hope Charity will assist her with RM55,000.

【She has never been sick but she took medicines to stabilise her high blood pressure and high cholesterol condition. The sudden coma revealed that she is suffering from serious health issue】

Pon Foong Moy suddenly fainted while sitting on the sofa at around 1:00pm on 29 April. As she has insurance, her family members sent her to a nearby hospital for examination. All the indexes checked were normal except her blood pressure. It was too high and there were signs of a stroke. A thorough examination later revealed that she has brain aneurysm and it has ruptured, which will cause severe damage to the surrounding brain cells, so she was referred to a specialist hospital in Penang for further examination and surgery.

The doctor has already performed emergency craniotomy to stop the bleeding and clear the blood clots, and she stayed in the intensive care unit for two weeks. As her condition was unstable, she was unable to be transferred back to a government hospital. The medical expenses then had soared to over RM200,000. After deducting the insurance claim of RM50,000, the children have to exhaust their savings and borrow from relatives and friends to pay for another RM133,000. The sought help from One Hope Charity to pay off the shortfall of tens of thousands ringgit in medical expenses.

Pon Foong Moy and her 65-year-old husband  have five children. Their 44-year-old son Teoh Kiat Seong works as a technician in Singapore with a basic salary of S$2,528. He also needs to bear the expenses of his wife and four children. Their 41-year-old second son Teoh Kiat Keng is single and works as a maintenance mechanic in Singapore. His basic salary is S$3,450. The two sons work hard and work overtime to earn extra money to support their parents and they also bear most of the mother’s medical expenses.

All the five children are very filial and do their best to take care of their parents. And now the mother is ill and the children work hard day and night, hoping to earn more money for the medical expenses. However, they still can’t afford the shortfall, so they approached One Hope Charity in desperation.