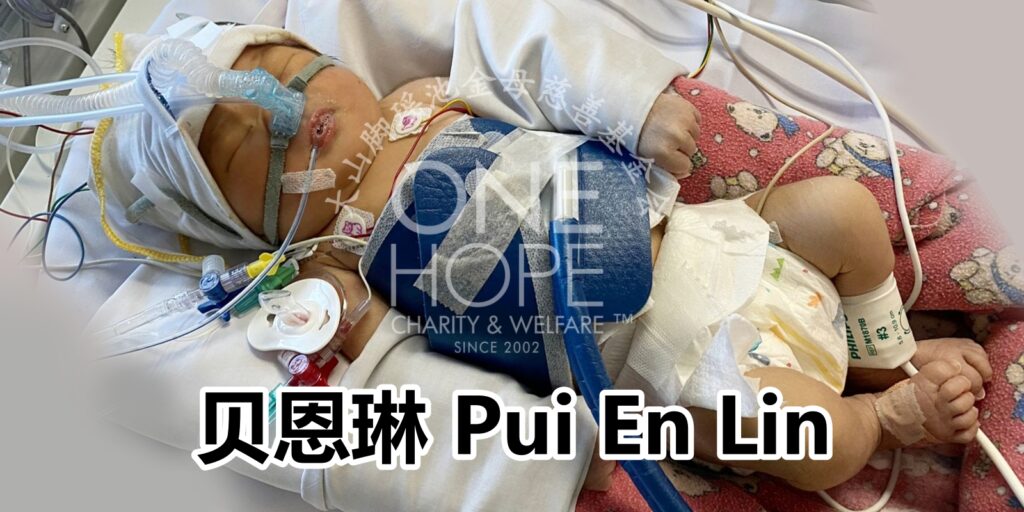 As the expected delivery date had passed, the doctor conducted augmentation of labour. However, the baby’s heartbeat dropped drastically during the process, and vacuum extraction was used to facilitate the delivery. The baby girl was diagnosed with moderate neonatal encephalopathy due to cerebral hypoxia and needed a three-week treatment.

Pui En Lin, a baby girl from Ipoh, Perak, had a sudden drop in heartbeat during the augmentation of labour process. After she was born, the doctor performed a detailed examination for her, and the report showed that she has moderate neonatal encephalopathy. She was in urgent need of cooling treatment to slow down the brain cell damages and its severity.

Baby En Lin was expected to undergo treatment and observation for about three weeks in the intensive care unit, and the estimated medical expenses is RM100,000. Her parents can only afford RM30,000, hence, they approached One Hope Charity to help them in raising the remaining RM70,000.

【The mother and infant were in danger. The baby girl suffered from cerebral hypoxia and was sent to the intensive care unit while the mother was rushed to the emergency unit due to postpartum haemorrhage. The father who faced the unexpected situation alone was like a cat on hot bricks】

The couple who worked in Singapore returned to Malaysia for delivery. The maternity check-up revealed that everything was normal. The father also prepared RM60,000 and chosen a private specialist hospital for the delivery to avoid crowded situation in government hospitals due to the treatment of Covid-19.

However, the expected date of delivery had passed but there was no sign of labour. On the advice of the doctor, the mother was admitted on December 16 for augmentation of labour. Unfortunately, emergency situation happened and the lives of the were in danger. The newborn was rushed to the intensive care unit for cooling treatment, to reduce the severity of the brain cells damage.

On the other hand, the mother experienced postpartum haemorrhage two hours after giving birth and was rushed to the emergency operation theatre. Having had to face the sudden situation where both his wife and daughter were fighting for their lives, the nearly collapsed father was like a cat on hot bricks. Fortunately, the wife had a successful surgery. However, the unclear condition of his child made him feel distraught, and the doctor told him that the newborn was expected to continue staying in the hospital for treatment.

Looking at his baby girl attached with tubes, the new father can only believe and pray that his daughter’s condition is stable. However, the father is worried as he cannot afford the huge amount of medical expenses. The family requests the doctor to transfer the baby girl to the government hospital but her condition is not suitable to be transferred. They also dare not take the risk to transfer her. The family has no other choice but to approach One Hope Charity for help.

Her 32-year-old father Pui Ban Leong works as a logistics shipping clerk in Singapore, earning S$2,189 a month. Her 32-year-old mother Wong Mei Yen was a customer service staff before delivery with a salary of S$3,100. However, she had quit her job and returned to Malaysia for delivery. The couple used their salaries to pay for the expenses in Malaysia and Singapore, as well as to support their respective parents. After delivery, the mother, who is currently jobless, will go back to her parents’ house in Ipoh to take care of her daughter while Ban Leong returns to Singapore to work and support the family.

The father originally prepared RM60,000 for the wife’s delivery. However, the unexpected postpartum haemorrhage and surgery had resulted the family to spend nearly RM30,000. They left RM30,000 for their daughter’s medical fee, but her medical fee is expected to be RM100,000.

After reviewing the case, One Hope Charity decided to assist the baby girl in raising the remaining RM70,000 in medical expenses. The family agreed to authorise One Hope Charity to take charge of the fundraising and collect donations from the well-wishers on their behalf.