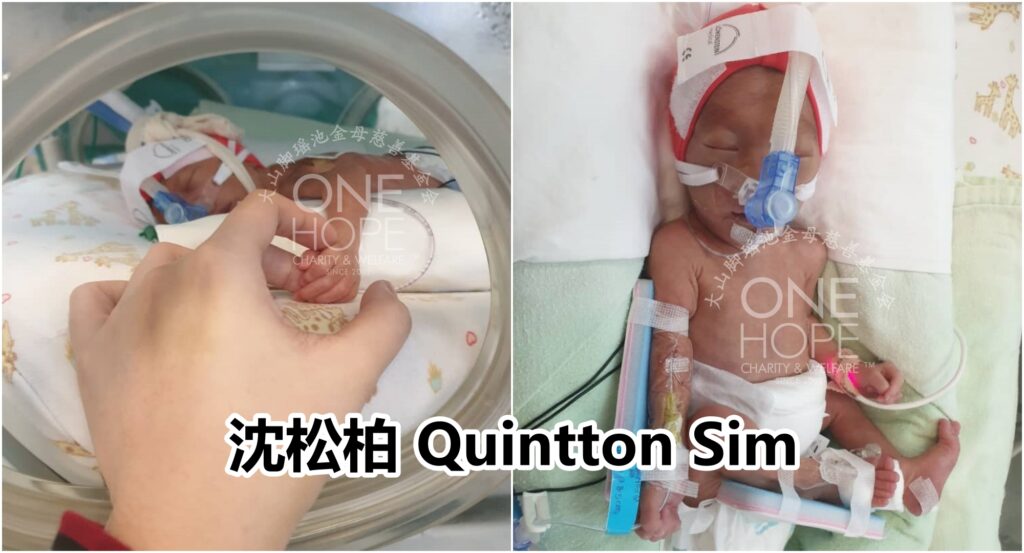 The new parents were excited to welcome the arrival of their baby boy. Unexpectedly, the baby’s growth slowed down when his mother was 31 weeks pregnant. The decrease in fetal movement also caused doubts in the mother. The doctor’s examination found that the fetal heart rhythm slowed down so the doctor conducted an emergency cesarean section. The baby was rushed to the intensive care unit, and he has been hospitalized for over three months.

Baby Quintton Sim from Selangor is unable to breathe on his own. He also does not know how to swallow, and his mouth and eyes are unable to close tight. He needs to rely on a breathing aid to survive, so he has been hospitalized since birth. The parents beg the public to give their child a chance to live, hoping that the public can help them with the shortfall of RM80,000 in medical expenses.

【Various tests and examinations have been carried out but the doctors are still unable to come out with a diagnosis. The parents are hoping for the best and their wish is to see their son gets better, so they do their best to take care of the baby】

The 21-year-old mother Tan Yun Hua went for a regular and scheduled prenatal check-up during pregnancy. The doctor found that the fetus was small and needed to pay close attention to fetal development. At 31 weeks of pregnancy, the mother discovered that the fetal movements decreased, so she went to the hospital for a check. The doctor found out that the fetal heartbeat was low, so an emergency cesarean section was carried out to save the child.

Baby Quintton was born on 27 April at the UM Specialist Centre. He weighed 1.28kg at birth. As his heart and lung were not fully developed, he was rushed to the incubator and was put under breathing aids and medication treatment. After more than a month of staying in the incubator, the doctor discovered that he could not breathe on his own, nor could he swallow on his own, so he still need to rely on a breathing aid and a feeding tube to survive.

The long-term insertion of the catheter into the lungs will cause a throat infection. In addition, the baby boy has a lot of phlegm, so the doctor performed a tracheotomy on the baby a month ago to facilitate sputum suction and breathing. However, the caretaker needs to be careful in handling and replacing the stoma.

As his eyes and mouth could not shut, and the doctor found white spots on the baby boy’s rain during an MRI examination, the doctor suspected that the baby had a cranial nerve condition, but fail to confirm the diagnosis. The baby is born at three months, and the corrected age is over a month. The hospital is now testing the breathing aids that the baby needs to use. Once the model of breathing aid is determined, the parents will be taught to take care of the child, then the baby will be able to be discharged from the hospital.

The parents have paid nearly RM10,000 in medical expenses since their baby was born, and the current hospital bills have accumulated tens of thousands of ringgits, which made the parents worried. They are not only worried about the situation of their child, but also the soaring medical costs.

The baby’s 34-year-old father Raymond Sim is a marketing and sales personnel, earning RM5,000 a month. The 21-year-old mother Yun Hua is a marketing executive with a salary of RM1,500. There is little left after they pay for their housing and car in monthly installments. They have also paid for the expenses during labor, the deposit for the child’s hospitalization, milk powder, diapers, confinement, and other expenses, so they do not have extra money to pay for the remaining fees. Hence, they approached One Hope Charity for help.

Once the baby is allowed to be discharged from the hospital, he will need respiratory aids and a sputum suction machine. After reviewing the case, One Hope Charity decided to assist in raising RM80,000 for the shortfall of hospitalization expenses, medical equipment fees and other expenses. The family agreed to fully authorize One Hope Charity to take charge of the fundraising and collect donations from the public on their behalf.