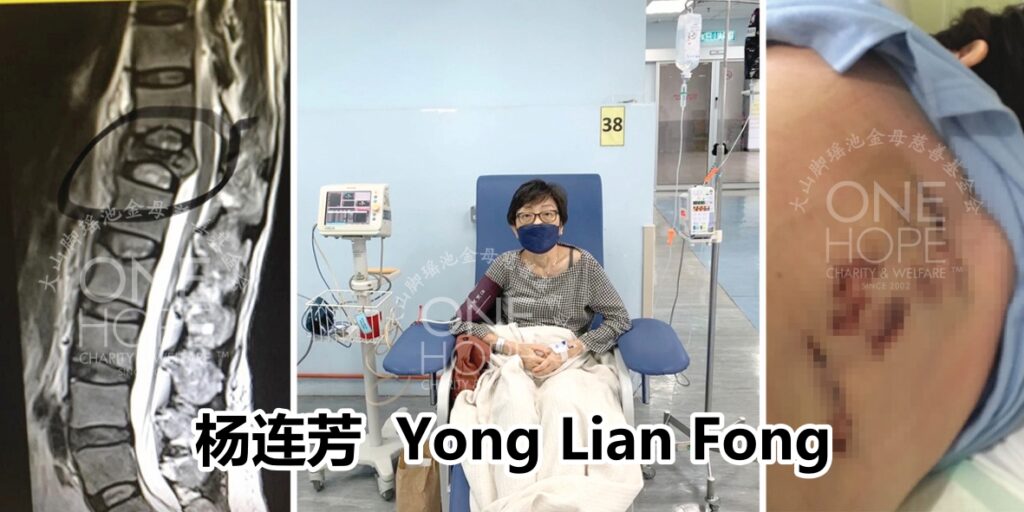 ***A total of RM10,000 from the “Emergency Medical Reserve Fund” has been channelled, hence, One Hope Charity will only launch a fundraising of RM79,000 for this case.***

“I only hope to live for another five years. I really hope to see my children get married and have their own children.”

Yong Lian Fong, a housewife from Kuala Lumpur, has been complaining of unbearable back pain since three years ago. She went to seek medical treatments, but the doctors could not identify the cause of her pain. Finally, she was found to have multiple myeloma after a blood test, and had undergone a spine treatment surgery, autologous stem cell transplantation and chemotherapy. However, the side effects were too strong, resulting in low blood platelet counts, so she was at a risk of bleeding at any time.

And now, the doctor recommends her to start immunotherapy to control the cancer cells. The course of treatment takes about six months, and there is still a shortage of RM89,000 in medical expenses. So they plead for help from the public.

【The chemotherapy medications caused her blood platelets to be low, and she suffered from unstoppable bleeding, so the doctor recommended her to stop using the medications】

65-year-old housewife Yong Lian Fong experienced frequent back pains in 2019. She went to the clinics for several times but her condition did not improve. She later went to a hospital and was instructed to undergo a blood test, and the test found that she had myeloma. At that time, the doctor declared that her situation was critical and she needed an emergency spinal correction surgery, otherwise, she would not be able to straighten her body anymore. Her family members panicked and agreed to let her undergo the surgery the next day. They also borne the medical expenses then.

As her family was unable to afford the following medical expenses, they requested to transfer her to a government hospital. She started her chemotherapy and autologous stem cell transplantation at the University Malaya Medial Centre, and the cancer cells were under control. Early this year, the doctor informed that the patient’s blood platelets would be low due to the use of the chemotherapy medications, and she would start bleeding uncontrollably if she injured herself, so the doctor recommended her to stop the medications. After that, the patient went for monthly follow-up visit. As she has multiple bruises on her body, she needs regular blood transfusions every month to avoid bleeding.

However, the doctor informed that the cancer cells had recurred in around May and June this year, and she was unable to continue using the two medications she used earlier. So she needed another immunotherapy medication. The family members requested her to be referred to another government hospital, but as the hospital also did not provided that medication, so the patient and their family need to bear the expenses by themselves.

The family had to face another challenge when the patient’s 65-year-old husband Wong Yoke Weng suffered from nosebleeds and felt dizzy during exercise in September last year. The test showed something unusual, and it was confirmed that he had a brain tumour, and the brain tumour had reached its terminal stage. The tumour is now pressing on the nerves causing blindness in both his eyes and deafness to both his ears, and his condition is critical.

The couple have three children. Their 34-year-old eldest son works for a direct sales company with an unknown income, their 31-year-old second daughter is a civil servant at the Securities Commission. Their youngest daughter was forced to quit her job so that she could take care of her sick parents at home.

The patient’s husband spent almost all this life savings on his own medical expenses, and now, the small amount of savings left can barely cover their living expenses. The family can only afford RM42,000 and they are pleading the public to help them with the shortfall of RM89,000 in medical expenses.

After reviewing the case following a home visit, One Hope Charity decided to assist Lian Fong in raising the remaining medical expenses. Her family agreed to fully authorise One Hope Charity to take charge of the fundraising and collect the donations from the well-wishers on their behalf.