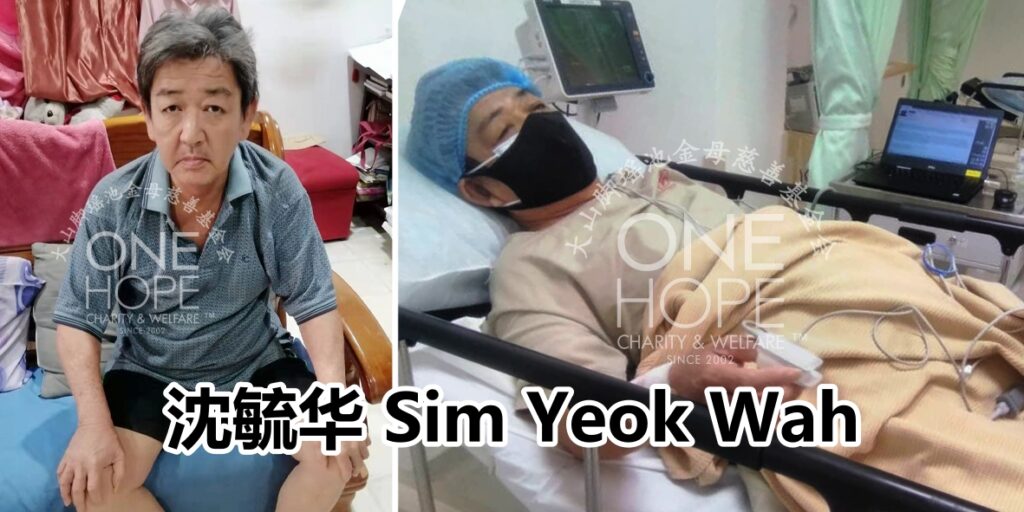 A 58-year-old father has worked hard all his life for his career. He has never seen a doctor due to illness. He recovered from a minor stroke in August last year but during a follow-up visit, it was found that three of his arteries were severely blocked. He may suffer a heart attack and collapse at any time.

58-year-old man Sim Yeok Wah from Tasek Gelugor in Penang, has no health issues all this while. However, in August last year, he suddenly became weak. After being sent to the hospital, he suffered a minor stroke on the left side and the right side of his body one day apart. The doctor successfully removed the blood clot in his brain with medication. He survived and started to be health conscious.

He was discharged from the hospital a week later and returned home to recuperate. His next body check-up was originally scheduled in May, but before the scheduled date, he had difficulty in breathing, cold sweats, and his hands and feet were weak. He suffered a lot, so his friends and relatives gathered some money to send him to the hospital for examination. The examination revealed that his three arteries were blocked – two by 90% and another one by 80%. His condition is critical and urgently needs an angioplasty to save his life as he may collapse at any time.

【He worked hard all his life to support his family, but recently he found out that he was ill. Not only he suffered from diabetes, hypertension and high cholesterol, but also hepatitis B】

Yeok Wah was strong and he had never felt ill. He has not seen a doctor for a long time until last year when he suffered a mild stroke. At that time, the doctor told his family to be mentally prepared because if the blood clot cannot be removed by medication, he might be paralysed for the rest of his life, or even experience something more serious.

Fortunately, the efficacy of the medicine worked, and he managed to pass through the challenge. He was discharged from the hospital and returned home to recuperate after a week of hospitalization. However, he has been unable to work since August last year, and his family is facing financial difficulty and relying on assistance from their family and friends.

Yeok Wah was involved in the iron grill door business before he fell ill. He used to earn about RM3,000 a month. However, he has been unable to work since he fell ill in August last year. His 46-year-old wife Lee Kooi Hwa is a housewife, and she needs to take care of her 86-year-old mother. She also makes festive cookies and cakes to help support the family.

The couple has two children. Their 22-year-old daughter is a tuition teacher with a monthly salary of RM1,300. Their 19-year-old son gave up his studies to work in a courier company, earning RM1,300 a month. They are having financial constraints and are unable to afford the medical expenses. Hence, they approached One Hope Charity for help.

After reviewing the case, One Hope Charity decided to assist Sim Yeok Wah in raising the necessary medical expenses. His family agreed to fully authorise One Hope Charity to take charge of the fundraising and collect the donations from the well-wishers on their behalf.