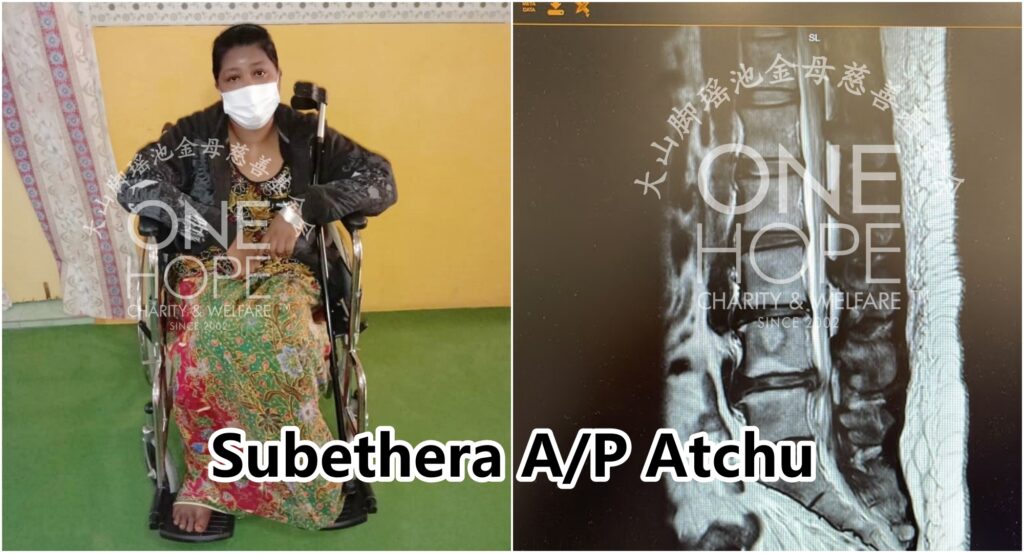 “I don’t want to permanently relying on other’s care. I can still work to support my family and myself. I hope that the public can help me with the RM20,000 in surgical fee so that I can stand up again and return to the work field.”

44-year-old single mother Subethera A/P Atchu, who works as a nursing caregiver, has been moving elderly and heavy objects for a long time. On top of that, an accident also caused her to suffer from herniated disc. She is now relying on crutches and a wheelchair to move around. The mother who has mobility problem is having for the public to help her to stand up again.

Subethera from Johor is a family nursing caregiver. She gains her job opportunities through recommendations from her neighbours, where she will go to families that need help to take care of the elderly or move heavy objects. Moving of heavy objects for a long period of time has caused long-term trauma to her spine.

In 2019, she met with an accident and fell off from her motorcycle. She injured her back but she thought that it was fine so she didn’t take the matter seriously. Unexpectedly, the effects from the accident and trauma to her spine have caused her severe pain and even could not walk normally. Examination revealed that she has herniated disc, so she pleads the public to help her with the RM20,000 in medical expenses.

【Protruding vertebral pulp might press on the nerves and lead to more severe spondylosis, and it might also cause other sequelae such as loss of bowel or bladder functions, so she needs to undergo minimally invasive transforaminal lumbar interbody fusion (MIS-TLIF)】

Subethera fell off her motorcycle in 2019 and she thought that she only suffered from backache, so she did not take it seriously. Unexpectedly, her limbs turned weak and her back was so painful about two weeks later, causing her to be unable to sit down. A doctor’s examination showed that her injured her spine, and she was asked to undergo physiotherapy, wear a back guard and take medicines, but her condition did not improve.

The doctor later performed a detailed examination on Subethera and confirmed that she suffered from herniated disc which made her unable to walk normally, and her back would be in pain for a long period of time. The doctor had to perform a discectomy for her to relieve the pain, but she did not see any improvement after the surgery. She walked with a hunched back like an elderly, and she would feel severe pain in her back even by walking only 10 steps.

As the surgery earlier was not effective, and Subethera’s pain was increasing day by day, the doctor performed an MRI scan on her and discovered that her spine problem deteriorated so she needs to undergo minimally invasive transforaminal lumbar interbody fusion (MIS-TLIF). This surgery can not only improve her back pain but can also help her to gradually return to a normal life, but the surgical and medical expenses cost RM20,000.

Subethera was also a cleaner before she became ill, and she is now unemployed with two children. The surgical fee earlier, the cost of living, her children’s education fee and other expenses were all borne by her elder sister as her other sisters also have their own family and financial difficulties, so they could only help Subethera once in a while. They are unable to afford the medical expenses this time, so they approached One Hope Charity for help.

After receiving the application, One Hope Charity conducted a home visit to review the case. One Hope Charity later decided to assist Subethera in raising the medical expenses required. Her family agreed to fully authorise One Hope Charity to take charge of the fundraising and collect the donations from the well-wishers on their behalf.