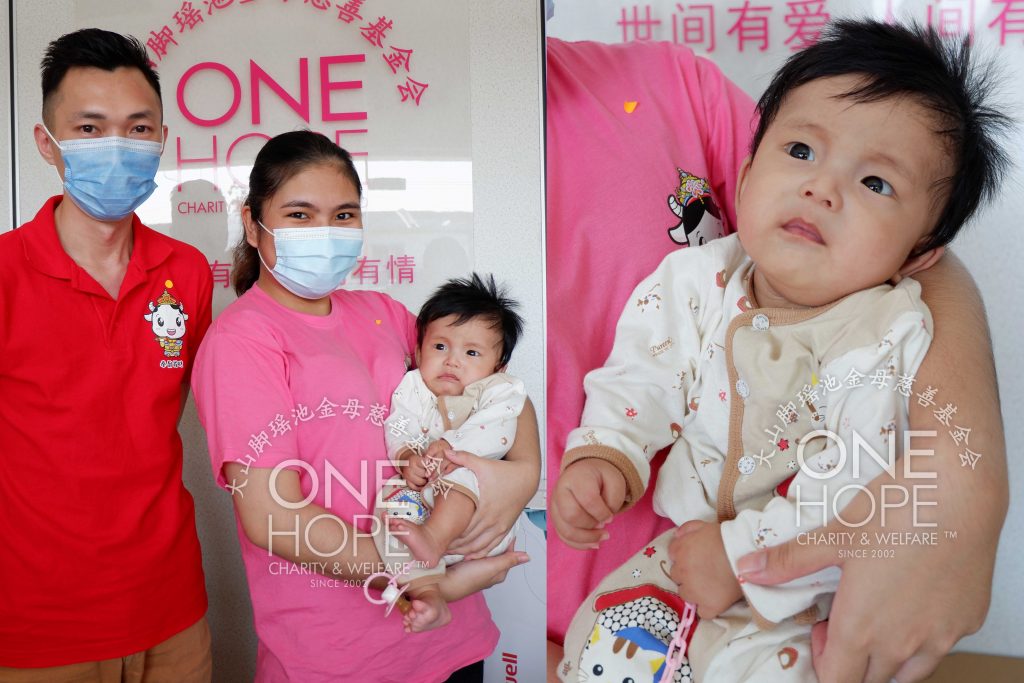 Inside the seemingly healthy 6-month old boy’s body, hides a weak and deteriorating heart which was formed with various complications. If the boy does not undergo surgery within two weeks time, his life would be put into serious danger. His parents urged the public to save their child. The baby boy urgently require RM80,000 for surgery.

When Tai Chee Lok was delivered in September last year, the doctor diagnosed him with congenital heart disease and conducted regular medical checkups. The baby was growing up as usual, but six months later, the doctor found out that his heart was swelling, and urged that the surgery must be done within two weeks.

This sudden news had left the parents very worried. The father thought that he would work hard to earn money to settle the delivery surgery fee and to raise their child, but he was laid off in December last year. Not only could he not earn enough to pay the medical expenses but also concerned about their living expenses. The family was put in a financially tight spot and had decided to approach One Hope Charity for help.

Little Tai was born on September 2 and at that time, the maternity examination was completely normal. The mother gave birth to him in Kulim Hospital and everything went smoothly. However, a few days after the baby was born, he was sent for further examination due to signs of jaundice. The doctor noticed that the baby has irregular heartbeat, hence transferred to the Penang General Hospital for further examination.

According to the medical report, the baby has a rare and severe congenital heart disease, including atrial septal defect (ASD), A-V valve regurgitation and co-triatriatum with a membrane in the left atrium causing obstruction. Little Tai has been put into ICU for 10 days before being allowed to be discharged and have scheduled medical checkup.

The family welcomes the baby back home for reunion and his father is determined to earn money to settle the surgery fee within five years. The baby must go to the hospital for clinical checkup once every one and a half months.

During a clinical check up on Feb 23, the doctor found out that the baby’s heart was swollen, and informed that the baby must undergo corrective heart surgery within 2-3 weeks time. He warned that the situation is critical and must be done as soon as possible.

The mother, Teh Jia Lie said that the child did not show obvious symptoms from his appearance, but whenever he cried a lot, his face would begin to lose colour and she would always do her best to coax her child to stop crying.

The father, Tai Siew Yoon, 33, was a salesman at a printing company with a monthly salary of RM2,800. However he lost his job in December last year and currently works in his friend’s advertising company, with a monthly income of RM2,400. Teh works as a housewife, and the family also has a daughter who is about four years old.