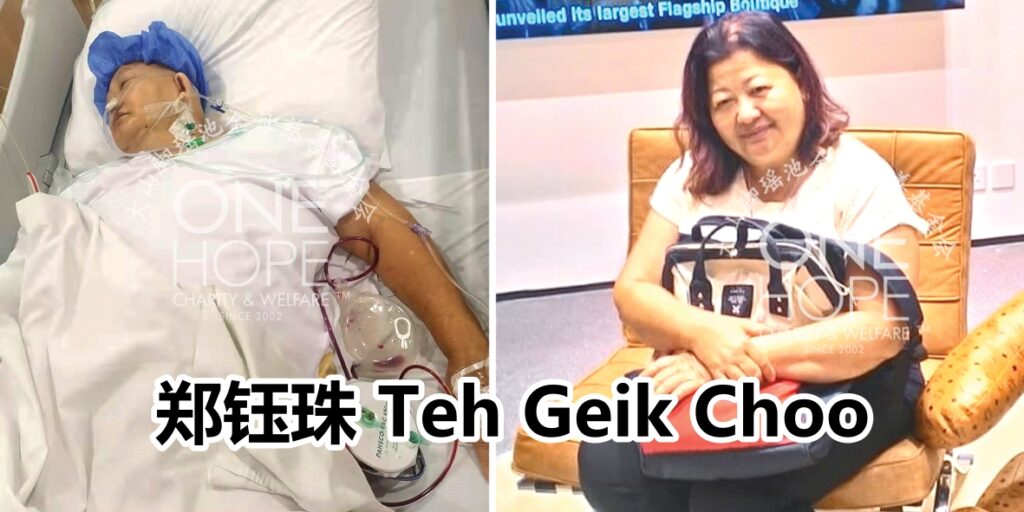 “My daughter already lost her father, she can no longer lose me – her mother. I must be strong to fight against cancer, please help me so that I can win the battle.”

65-year-old single mother Teh Geik Choo from South Seberang Prai, Penang, lost her husband 10 years ago due to stomach cancer. He left behind their 16-year-old daughter. Unexpectedly, Geik Choo was diagnosed with cervical cancer in August last year. She wanted to give up treatment at first due to financial constraint, but when she thought about her daughter, she decided to actively seek for medical treatment.

After Geik Choo completed her chemotherapy and hysterectomy, the doctor suggested that she should take oral chemotherapy medicine for the next two years. However, it is costly and the oral medication for five months costs RM65,470.

Geik Choo said that she went to the hospital for a check-up in August last year after she felt unwell. After a check by the gastroenterologist, no problem was detected in her stomach, hence, the doctor referred her to the gynaecology department. Unexpectedly, the examination report revealed that she suffered from cervical cancer.

The surgery and chemotherapy expenses were covered by Geik Choo’s insurance. At the same time, the hospital also assisted her to apply for assistance from the Welfare Department to pay for the expenses that the insurance did not fully cover earlier.

Currently, she has completed the chemotherapy, and the doctor believed that her chance of recovery is very high. Therefore, the doctor suggested her to take oral chemotherapy medicine for the next two years, but it is very expensive.

【Her Japanese husband died of stomach cancer 10 years ago. She raises her daughter with the income she gets from being a caregiver for two disabled persons】

Geik Choo met her Japanese husband when he came to Malaysia to work. They later  got married but he died of stomach cancer 10 years ago, leaving behind his wife and a 16-year-old daughter, who is still schooling.

Geik Choo works as a caregiver for two disabled adults, earning RM2,200 a month. However, since she was diagnosed with cancer, she stopped taking care one of them, which resulted her income to reduce from RM2,200 to RM1,200.

After the passing of her husband, she and her daughter depended on each other. She originally wanted to give up on treatment, but when she thought of her daughter, who is still a student, she was reluctant to leave her, so she decided to face the disease positively and started to receive treatment. However, she is still lack of money for her medication, hence she approached One Hope Charity for help, hoping to receive donations from the public.

【Her chance of recovery is high. She begs the public to help her so that she can win the battle against cancer】

According to Geik Choo’s report, her chance of recovery is quite high, and her daughter is still studying, so she promised to actively fight the cancer. She hopes that the public can give her a chance to win the battle against cancer.

After a home visit, One Hope Charity decided to assist Teh Geik Choo in raising RM65,470 for her oral chemotherapy. Her family agreed to fully authorise One Hope Charity to take charge of the fundraising and collect the donations from the well-wishers on their behalf.