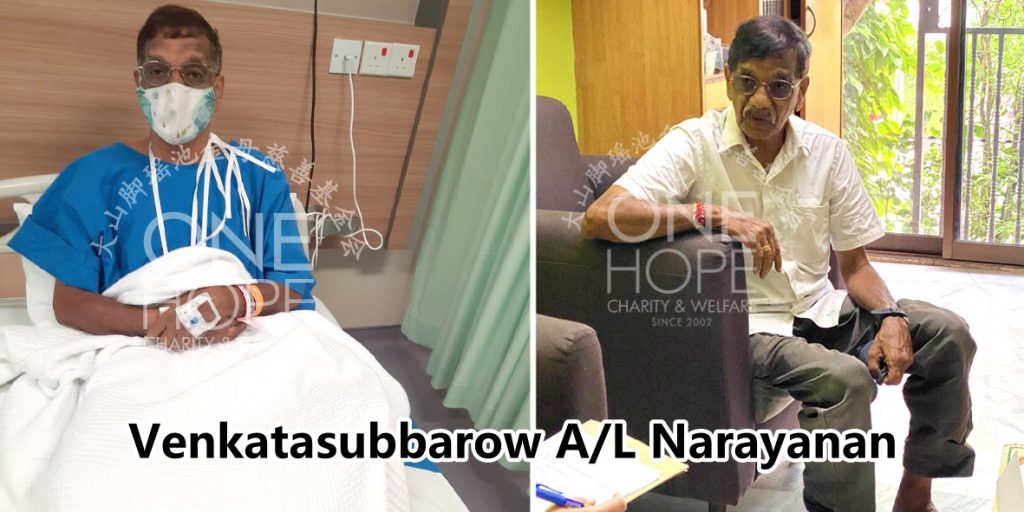 The Education Commissioner of the Consumers’ Association of Penang, who has been dedicated to the society for 40 years of his life. In a medical check-up found out he had severe cardiovascular blockage and needed undergo an ‘Angioplasty’ surgery otherwise he would have a heart attack at any time.

The 69-year-old Venkatasubbarow A/L Narayanan from Penang needs to undergo emergency surgery. However, he was hospitalized in the past and it was finished his savings. Therefore, he seeks for financial support of RM35,000 surgery fee.

【The patient was hit on his foot by a vase at work last year, causing the toe necrosis. He finished up the savings to save his toe, however now he has a heart blockage problem, so he can only ask the public for help】

69-year-old Venkatasubbarow A/L Narayanan suffered from diabetes at a young age. After joining the Consumers’ Association of Penang as an Education Commissioner, he usually fulfills his duties to educate the public about consumer affairs. He also practicing reduce sodium and sugar intake, 5000 walking steps a day, diet control and follow the indicators of good health.

Last year, his left and right toes were necrotic because he was smashed by a vase. In addition, his wounds worsened due to diabetes. Fortunately, surgery was performed in time to save the toes from the risk of amputation.

Last month, he had a medical checkup, and the examination found that his main cardiovascular blockage and will cause heart attack at any time, and he needed to have an ‘Angioplasty’ surgery.

Venkatasubbarow has worked as the Education Commissioner of the Consumers’ Association of Penang for more than 40 years, with a salary of only RM3,500. His wife, Soundrammal A/P Ramasamy Sundaraju (56 years old), is a housewife who makes bakery during the festive season to support the family expenses. They have three children, of which the eldest daughter and the second daughter are general admin, and the 18-year-old son is still studying. Therefore, he can't afford the surgery fee and seek help from general public.