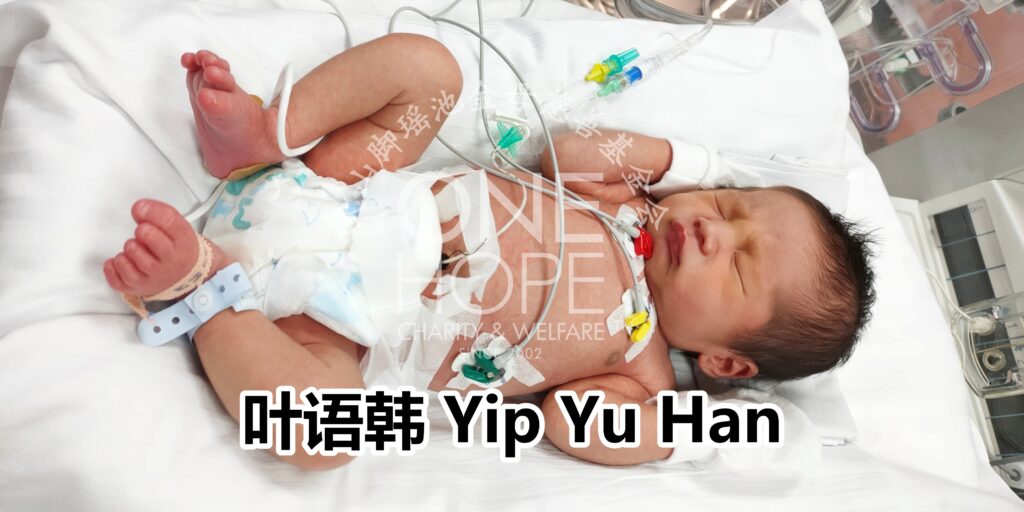 The pregnant mother suffered from hyperemesis gravidarum, resulted her to experience severe gastric pain, and the pain was unbearable. Even the painkillers were unable to relieve the pain. Two months before giving birth, she relied on painkiller jabs to relieve her condition. However, the medications had side effects on the fetus. Her baby had rapid heartbeat and could not breathe on his own at birth, and was rushed to the intensive care unit.

【The mother suffered from severe gastric pain and had to rely on painkiller injections. The baby could not breathe on his own at birth. The baby also needs to quit the addition to the medication. The mother feels regret and blames herself for that, and now, she can only provide the baby with full breastfeeding to make the baby healthy, hoping that he can get through this challenge smoothly】

31-year-old mother Ee Chooi Wen has been suffering from gastric pain since she was a teenager, but she would be fine after taking the medicine. Unexpectedly, she suffered from severe and unbearable gastric pain during her pregnancy due to hyperemesis gravidarum. In the early stage of pregnancy, she experienced symptoms of morning sickness such as nausea, vomiting, acid reflux, gastric pain and other conditions. After getting through a rough first trimester, her condition finally stabilised. Unexpectedly, from the seventh month of pregnancy, her gastric pain problem became more and more severe. Even painkillers could not help in relieving the pain, so the doctor administrated jabs on her in the hospital so that she could survive the pregnancy.

However, due to long-term injection of medication, the private maternity hospital was worried that the baby could not breathe on his own at birth. In addition, the mother’s uterus was weak and was unable to give birth naturally, so the maternity hospital referred the pregnant mother to a specialist hospital with a paediatric intensive care unit for caesarean section. The baby was found to have rapid heartbeat at birth, so he was rushed to the incubator and he has been relying on a breathing aid.

The fetus has become addicted due to the long-term dependency of medication. After birth, the baby could not breathe on his own, and he also suffered from other problems such as convulsions and lethargy. The doctor estimated that the baby will need to stay in the hospital for two weeks, and the medical fee is expected to be RM45,000. As the mother’s prenatal treatment in the hospital has exhausted more than RM30,000 of their savings, and the parents were unprepared for the unforeseen situations after the child was born, so they are unable to afford their child’s medical expenses. Hence, they approached One Hope Charity for help.

The 36-year-old father Yip Mun Hong is a quantity surveyor with a salary of RM4,600. The 31-year-old mother Ee Chooi Wen is a housewife. Baby Yu Han is their first child.

After reviewing the case, One Hope Charity decided to assist baby Yu Han in raising the RM45,000 in medical expenses. The family agreed to fully authorise One Hope Charity to take charge of the fundraising and collect the donations from the well-wishers on their behalf.