With your help and support, Chong Wen Bin, the premature baby boy from Ipoh, Perak, is now safe. He has returned home to reunite with his family. While holding the baby in their hands, his parents expressed their gratitude to all generous individuals who offered help.

Baby Wen Bin was born before the expected due date and was diagnosed with pulmonary edema (fluid in lungs). He was given antibiotic treatment in a special incubator in the neonatal intensive care unit (NICU) for three weeks. The treatment cost amounted to RM80,000.

The parents were overwhelmed by the medical expenses. Wen Bin is their first child, and for the sake of their son, the couple approached One Hope Charity for help.

A fundraising was launched by One Hope Charity recently. A lot of donations came in and the parents could allow baby Wen Bin to undergo his treatment in the NICU. His condition had gradually stabilised. After two weeks, the baby could finally get rid of the breathing aid. That was also the first time that his father Chong Wei Cheng held Wen Bin in his arms.

Baby Wen Bin, who was small in size, showed strong resilience. After the breathing aid was removed, the doctor agreed that he was out of danger and allowed him to be discharged from the hospital.

Baby Wen Bin’s parents thanked all kindhearted people who offered help. They also promised to help other patients in need in the future and pass on the love to the others. 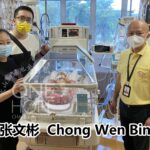