They are just a pair of ordinary couple but the wife showed how much she loves her husband through actions. The wife donated a kidney to save her husband, who suffered from kidney failure. After a successful six-hour kidney transplant surgery, the husband and wife are now being discharged from the hospital. The husband is very thankful to the wife for donating a kidney, and they are also grateful to the public for their donations and prayers, so that they can go through this life challenge smoothly.

“Without my brave wife who donated a kidney, and the kind donations from the public, as well as the professional medical team, I don’t think I can make it. I have been given another chance to live and I really feel grateful for that.”

39-year-old Na Soon Beng, who has been undergoing dialysis for a long time, received a kidney donation from his beloved 38-year-old wife Low Yien San. After undergoing various tests, the wife finally donated a kidney to her husband on 19 July. The kidney transplant surgery and the couple were put under observation. Yien San was allowed to be discharged from the hospital on 22 July, while her husband Soon Beng was discharged on 26 July.

Soon Beng said that his wound is still aching, but he feels much better compared to the time when he underwent dialysis. He is gaining back his health, and he is grateful to the wife, and he admires his wife’s courage.

“At this stage, health is the most important thing to me. I wish to regain my health as soon as possible so that I can take up the responsible to take good care of my family,”

When asked about her mood, she admitted that she entered the operating room with an uneasy mood because during the examination, the doctor informed that her husband’s blood vessels were calcified due to dialysis and diabetes. The doctor said if the blood vessels could not be connected during the kidney transplant, the kidney she donated will be useless. So, she felt very happy when she knew that her husband’s surgery was a success.

And now, the husband needs to go to the hospital three days a week for frequent follow-up visits, and the follow-up visit schedule will be adjusted accordingly after three months. He also needs to take anti-rejection medication for a lifetime, which will affect his immune system. As the husband and wife are both having only one kidney each, they have to take great care of their diet, as well as their health.

Na Soon Beng from Jenjarom, Selangor, met with an accident when he was 12. He had to remove his pancreas to save his life, but since then, his body failed to secrete insulin which led to complication and he has started dialysis since two years. He also suffered from diabetes since he was in his 20s, and he controlled his condition by medication.

Two years ago, his condition deteriorated. His body was high in toxins causing him to suffer from edema and confusion. The doctor informed that he needed dialysis and detoxification, but as he was still young, the doctor suggested him to undergo kidney transplantation. His wife also agreed to donate a kidney to save him. However, Soon Beng rejected the suggestion at that time as their children were still young and needed their mother. Two years later, their children are now aged nine and seven. After two years of psychological preparation, he agreed to accept the kidney donation from his wife. One Hope Charity launched a fundraising on 20 September 2021 to raise fund for the kidney transplant surgery, but the surgery was delayed due to the movement control order.

And now, everything has changed. One Hope Charity is grateful for the assistance of the public. We also pray that the couple can have a better future. Their story touches the heart of everyone, and it also encourages the other patients not to give up easily as the world is still full of hope. 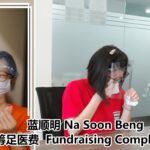 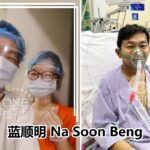 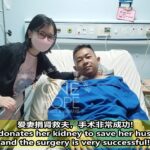 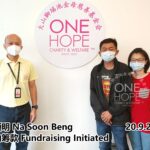 Na Soon Beng - Part 4 Thanks to the public