‘Thanks to the public’s donations for my mother’s surgery fee of ruptured brain aneurysm and cranial. Now my mother’s condition is getting better and better.’ from children of Tan Ah Nya.

Tan Ah Nya, 65, from Penang Island, who suffered a ruptured brain aneurysm on June 16 and performed three surgeries. After that, she was under observation in the Intensive Care Unit (ICU) for nearly a month. The doctor discharged her from the hospital in mid of July, and the doctor suggested that the cranial surgery require to replace as soon as possible.

After being observed in the Intensive Care Unit (ICU) for several days after the operation, the doctor approved her to be discharged. When she was discharged from the hospital, her condition was good that she not required to drink milk by intubation and able to take softer food.

Tan Ah Nya now must undergo regular physical therapy and follow-up visits. The doctor believes that her progress is very good, and her family members are happy with her current condition.

The family members are also accompanying Tan Ah Nya on the journey of recovery. They truly thank all kind-hearted people for helping them when the family was in critical and helpless situation. 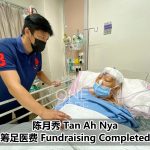 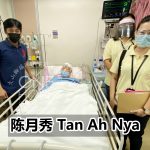 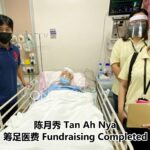 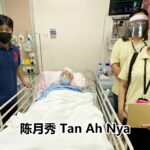 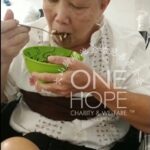